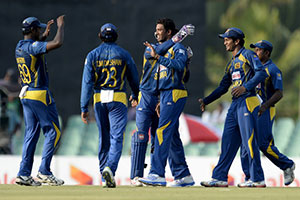 Sri Lanka will play New Zealand in a two-match Twenty20 International series starting on Tuesday needing to win at least one match to retain its top position in the ICC T20I team rankings table.

Sri Lanka, currently ranked number-one with 128 ratings, needs to win one of the two matches in the series against New Zealand to retain the top spot.

Because the rankings are weighted to reflect this difference, Sri Lanka’s failure to win both the matches will result in it losing as many as eight points, which means either India, South Africa or Pakistan could become the number-one ranked side, depending on how the series between South Africa and Pakistan pans out.

However, if Sri Lanka wins just one match in the series, they will retain the number-one ranking. They will increase the lead if they win the series 2-0 against New Zealand.

In the scenario of New Zealand beating Sri Lanka 2-0, either South Africa or Pakistan will need to make a clean sweep to claim the top spot from Sri Lanka.

However, if South Africa and Pakistan end up with a 1-1 deadlock, then India will move to the top of the tree.