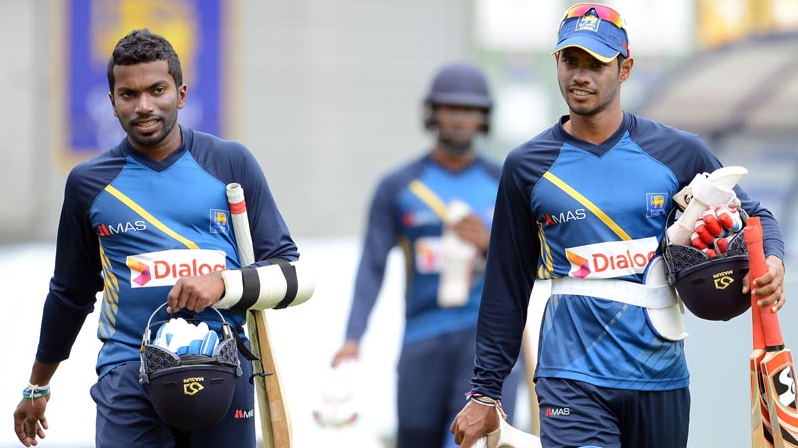 The newcomers have impressed against top quality opposition. © AFP

Sri Lanka followed up their unprecedented 3-0 Test series whitewash of Australia with a 4-1 series loss in the ODI series, but there is plenty of young talent to be excited about.

Kusal Mendis, Dhananjaya de Silva and Lakshan Sandakan had all left their mark on the Test series, before Amila Aponso impressed later in the limited-overs matches.

Whilst de Silva got off the mark in international cricket with a six on the first day of the Test series, Sandakan was perhaps the first to grab the attention of the cricketing world. He kept Sri Lanka in the hunt after being bowled out for a paltry 117 by restricting Australia to 203 with 4-58.

At a crucial moment in the game, Sandakan bowled a stunning googly to befuddle Mitchell Marsh and send the young all-rounder on his way. Marsh had fallen for a well compiled and calm 31, as Australia slipped to 130/5. Sandakan followed this effort in the second dig with 3-49, including the crucial scalp of Joe Burns for 29, ending a promising 30-run stand that was looking ominous for Sri Lanka. This gave him match figures of 7-107, the best figures for a chinaman bowler on debut in Test history. It took him past the legendary Chuck Fleetwood-Smith, who took 5-165 on debut in Durban in 1935.

Lakshan Sandakan proved to be more than a handful. © AFP

In his debut Test, it was clear that Sandakan still had some work to do on mastering his control out of the hand, but there was plenty to be positive about.

"Sandakan is a brilliant find for us," Angelo Mathews said, after the first Test victory. "We knew that the wicket was going to take turn and Sandakan responded brilliantly."

The second innings of that 106-run win was where Mendis took centre-stage. Sri Lanka were a long way behind Australia and floundering at 6/2 when the 21-year-old scored a majestic 176, highlighting a maturity well beyond his years.

In a Test where only one other batsman (Australia's captain Steve Smith) passed 50, to more than triple the next-highest score against the top-ranked team in the world, was truly a special achievement. Even the manner in which his runs came was impressive. He mixed aggression with appropriate defence, as he struck 21 fours and brought up his century with a six off Nathan Lyon.

In the second Test, Mendis was again the hero on the first day, with a sparkling 86. He top-scored in the innings and only missed out on a century after edging Mitchell Starc to Peter Nevill halfway through the day's proceedings.

Sandakan did not have as much of an impact in the second Test at Galle, as he was scarcely needed on Rangana Herath's favourite hunting ground, but he ended Australia's stay at the crease with just his second ball in the first innings, and his victim once again was Marsh.

Sandakan fell away in the final Test in Colombo, with figures of 0-70 in the Australian first innings and then did not bowl in the second innings. But it was the 24-year-old de Silva who this time showcased his brilliance, scoring 194 runs for once out, including 129 and 65 not-out.

It was a match of contrasts for de Silva, as in the first innings he was required to bat Sri Lanka out of a miserable hole at 26/5, and then in the second innings his captain needed him to step on the accelerator and set Australia an unreachable target. He duly did both, sticking around with Dinesh Chandimal for a 188-run stand on the opening day and then striking 10 fours late on day four and on the final morning.

Mendis followed up the Tests with a consistent ODI series, scoring 174 runs at an average of 34.80, while de Silva has been exciting to watch in the short form, particularly during the fourth ODI. On that occasion, he smashed 76 from just 87 balls before falling in just the 28th over. If he had hung around, a big score may have been on the cards, although Sri Lanka fell for 212.

It was much the same story for Mendis, who had scored 69 out of Sri Lanka's total of 146 when he was dismissed by Adam Zampa in the second ODI, but Mathews and Kusal Perera also scored half-centuries to steer Sri Lanka to a daunting total of 288 and an eventual 82-run win.

Whilst the Sri Lankan team management may be reluctant to pick Sandakan in coloured clothing, while he is still working on his control, there is still indication that he could be a threat in all forms of the game. In the only match he played (the opening ODI in Colombo), he took 2-33 from five overs, including the wickets of Matthew Wade and Moises Henriques.

It was 23-year-old Aponso who made more of an impact in the ODIs. Making his debut in the first game, Aponso picked up seven wickets, including a best bowling effort of 4-18 in the opening match of the series. His victims included Australian captain Smith, George Bailey and all-rounder James Faulkner.

In a team that was struggling in both the short and long forms of cricket prior to the Australian tour, each of these youngsters have proven that they are more than capable of helping Sri Lanka rebuild following the retirements of Kumar Sangakkara, Mahela Jayawardene and Tillakaratne Dilshan.

Of course there is room for improvement, but competing well against the world's best team is a great start indeed.