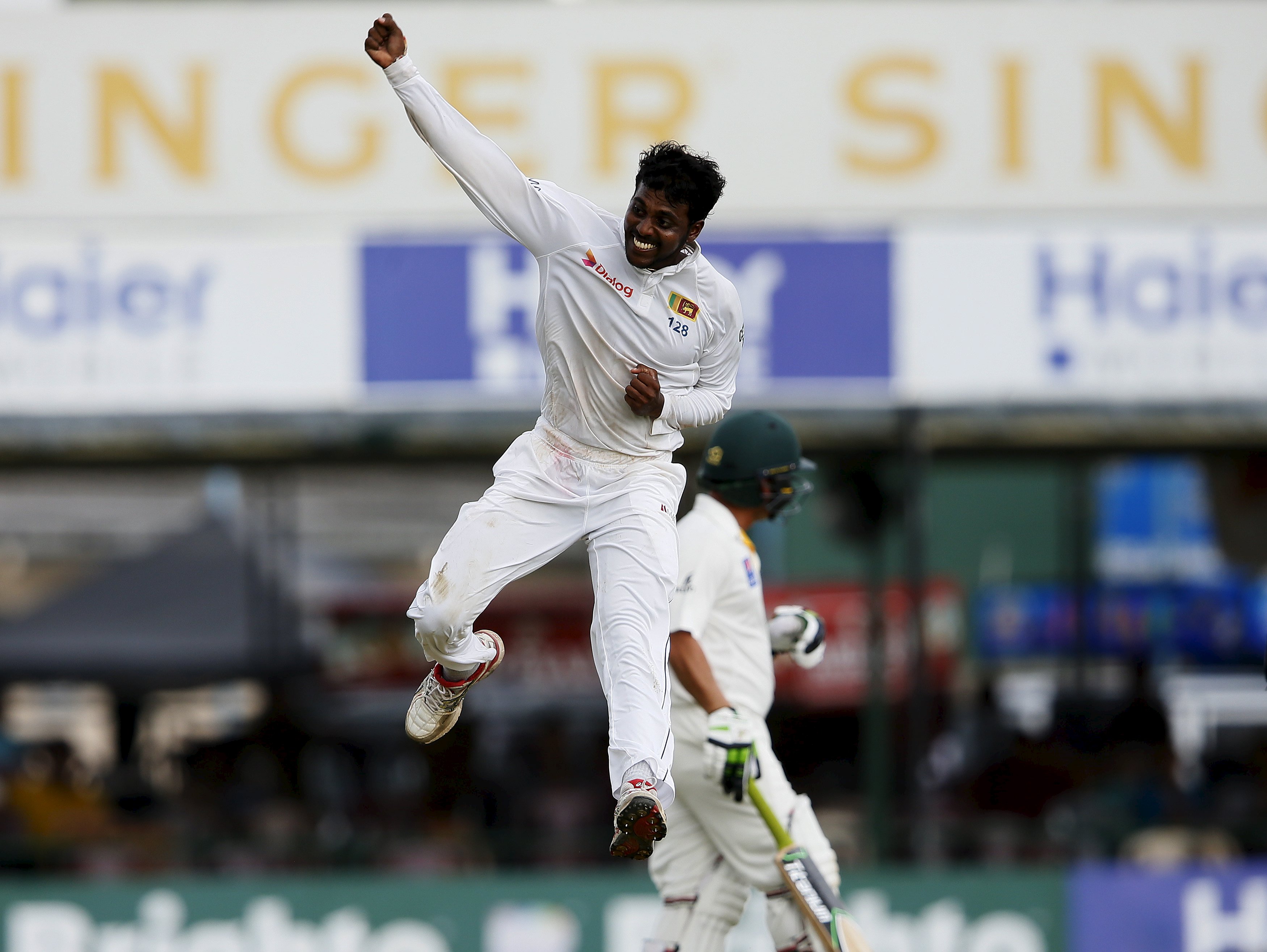 Sri Lanka off-spinner Tharindu Kaushal scythed through Pakistan's batting order to pick up his first five-wicket haul as the visitors were bundled out for 138 on the opening day of the second Test on Thursday.

Pakistan captain Misbah-ul-Haq was left to rue his decision to bat after winning the toss as Sri Lanka's bowlers extracted enough movement from the P.Sara Oval pitch to dismiss their opponents in two sessions.

In reply, the hosts made a watchful start and reached stumps on 70 for one, losing of opener Dimuth Karunaratne (28). Kaushal Silva (21) and Kumar Sangakkara (18) were at the crease.

Pakistan's pace spearhead Wahab Riaz suffered a blow on his bowling hand while batting which weakened the attack as the left-arm paceman was experiencing pain trying to hold the ball.

Kaushal, playing only his second Test, came in as a replacement for the injured Dilruwan Perera and took all his wickets in the second session after fast bowler Dhammika Prasad picked up the first three.

Opener Mohammad Hafeez (42), who was hit on the back of his helmet by debutant fast bowler Dushmantha Chameera, was the highest scorer for the visitors, who won the opening Test at Galle by 10 wickets.

An unchanged Pakistan lost Ahmed Shehzad (one) in the third over of the morning when the right-hander edged Prasad to first slip, where Kumar Sangakkara completed a sharp catch.

Hafeez and Azhar Ali (26) shared the only meaningful partnership of 46 for the second wicket.

Pakistan's one-day captain Azhar looked fluent during his stay until he was originally given not out by the umpire to a caught behind appeal on the first ball of Prasad's second spell.

However, home skipper Angelo Mathews called for a review and the on-field decision was overturned.

Younus Khan, playing his 100th Test, was lucky to survive another review from Mathews off his own bowling but fell immediately after lunch to give Prasad his third scalp.

Pakistan's hopes then rested on Misbah (seven) but the 41-year-old was run out after a misunderstanding with Sarfraz Ahmed (14).

Such was Kaushal's impact on the innings that Sri Lanka did not need their main spinner Rangana Herath to bowl an over as the 22-year-old with a distinctive high-kneed run-up rose to the occasion on his home debut with figures of five for 42.

Sri Lanka also handed a debut to 23-year-old Chameera, who picked up his first Test wicket when Zulfiqar Babar dragged a short ball onto his stumps.

The third and final Test is in Pallekele from July 3-7 before the teams play five one-dayers and two Twenty20 matches.