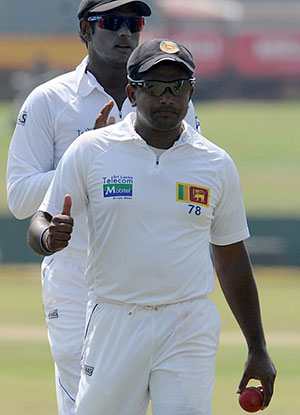 Rangana Herath has become the highest-ranked spinner in the Reliance ICC Player Rankings for Test bowlers, following the conclusion of the second Test between Sri Lanka and New Zealand in Colombo this week.

Herath’s figures of 6/103 and 3/67 at the P.Sara Oval saw the left-arm spinner rewarded with a jump of two places, and has put him in second position ahead of Pakistan off-spinner Saeed Ajmal and South African fast bowler Vernon Philander.

The only Sri Lanka batsman to move in the right direction in the table is Angelo Mathews, who moved up two places and is now in 26th position.

The news for Sri Lanka’s top batsmen is not particularly positive.

Kumar Sangakkara, after losing his number-one spot to Australian captain Michael Clarke earlier this week, has slipped further after his double failure in Colombo. The left-hander scored 0 and 16 and has dropped two places to fourth position.