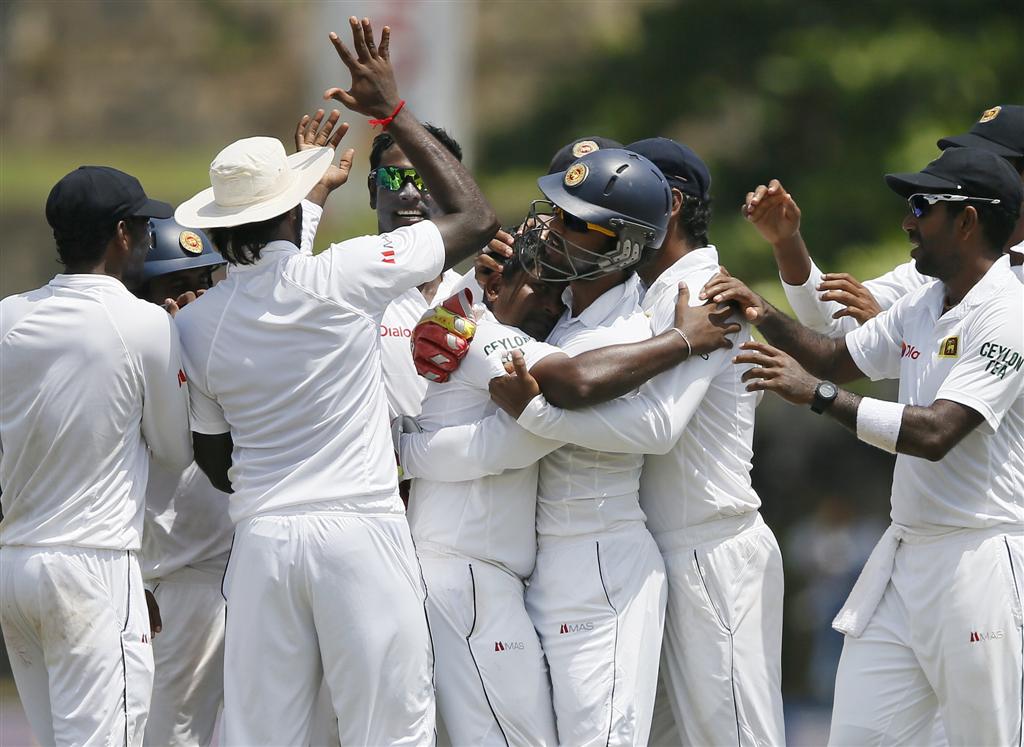 Rangana Herath is now in third place in the all-time wicket-takers' list for left-arm spinners. © Reuters

There was good news for several Sri Lanka players in the latest ICC rankings released following Sri Lanka's memorable 63-run victory over India in the first Test at Galle on Saturday, with career-high gains for Dinesh Chandimal and Tharindu Kaushal, as Rangana Herath helped inspire the hosts to an unlikely victory.

Skipper Angelo Mathews has overtaken his team-mate Kumar Sangakarra and, in the process, moved up one place to fifth in the ICC Player Rankings for Test Batsmen after scores of 64 and 39.

Sangakarra, who will make his final appearance for Sri Lanka in the second Test starting in Colombo on Thursday, now lies nine points behind Mathews on 851 points.

The highest mover in the batting rankings was wicket-keeper Chandimal who put in a man of the match performance by scoring 59 and 162 not out to vault 22 places to a career-high 23rd.

There was also good news for India's Shikhar Dhawan, who has also climbed 15 places to a career-high 32nd after scoring his fourth Test century (134 and 28). In doing so, the Delhi man has become only the third Indian opening batsman — after Sunil Gavaskar and Rahul Dravid —- to score Test centuries in consecutive innings overseas.

Lahiru Thirimanne has also moved up four places to 78th.

As a result of some fine performances with the ball from both sides, there was also movement in the top 10 of the ICC Player Rankings for Test Bowlers.

Left-arm spinner Herath has moved up two places to sixth after claiming match figures of seven for 115 runs, his 22nd five-wicket haul in Test cricket, and is now on 771 points, a point clear of South Africa's Vernon Philander. Herath is now in third place in the all-time wicket-takers' list for left-arm spinners on 270 wickets, four clear of Bishan Singh Bedi, with England's Derek Underwood (297 wickets) in second place and New Zealand great Daniel Vettori (362) leading the list.

Meanwhile, India's Ravichandran Ashwin has climbed three places to ninth after claiming match figures of 10 for 160, while there were also notable career-high gains for Sri Lanka duo Kaushal (up 21 places to 60th) and Mathews (up three to 73rd).

The top of the all-rounder rankings remain unchanged with Bangladesh's Shakib Al Hasan leading the way on 384 points, however Ashwin has risen one place to second ahead of Philander, and is now 45 points behind Shakib.