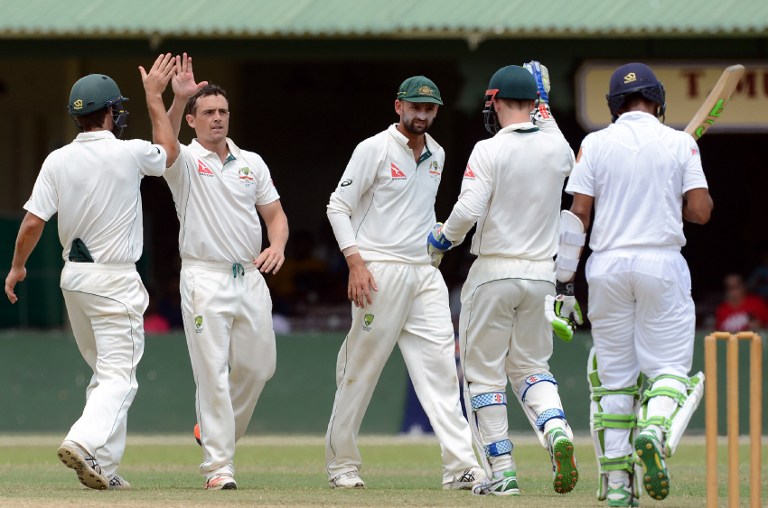 Leg spinner Steve O'Keefe put in a commanding performance to deliver Australia's touring party a crushing innings victory over a Sri Lankan XI in the three-day tour match that ended on Wednesday.

O'Keefe top-scored for Australia with 78 in the visitors' only innings of 474 before claiming 5-43 in the Sri Lankan XI's first innings of 229. In the second innings, O'Keefe claimed an amazing 5-21 to give him a 10-wicket match haul.

After the Sri Lankan XI had elected to bat first on the opening morning, electrifying paceman Mitchell Starc made the perfect start for the Australians, removing Oshada Fernando for a third-ball duck within the first over. It was 11/2 and then 32/3 when Mitchell Marsh dismissed Manoj Sarathchandra for 14. Despite the 101-run stand between Asela Gunaratne and Milinda Siriwardana that followed Sarathchandra's dismissal, the Sri Lankan XI faltered for a paltry 229.

Asela Gunaratne was the top scorer for the hosts in their first innings. © AFP

Whatever difficulties the other batsman may have had, the Sri Lankan selectors will be happy to see that the good form of Siriwardana is showing no signs of abating. Siriwardana has been an oasis of calm in a panic-stricken middle order, having recently lost the services of all-time greats Mahela Jayawardene and Kumar Sangakarra.

The becalmed Siriwardana scored 53 from 77 deliveries, with seven fours and a pair of sixes, while Gunaratne scored 58 from 106 balls with nine boundaries. It was O'Keefe who dismissed the latter before going on to demolish the middle order and tail, but paceman Jackson Bird was also impressive for the visitors with 2-26 from 11 overs at an economical rate of 2.36 runs per over.

There were plenty of positive signs for the Australian tourists with the bat, as Joe Burns and Shaun Marsh got the innings off to an excellent start with a 97-run opening stand. Burns was eventually bowled by Vimukthi Perera after a 131-ball stay that yielded 72 runs, while Marsh chipped in with 47. Australia's Test skipper Steve Smith scored a handy 57, but it was O'Keefe who top scored with 78 not out, finishing the innings unbeaten.

Shehan Jayasuriya claimed a five-wicket haul with his off-breaks. © AFP

The best bowler for the hosts by far was off-spinner Shehan Jayasuriya, who made up for his earlier failure with the bat by claiming 5-110 from 30 overs.

The Sri Lankan XI simply could not master spin, especially O'Keefe's bowling. Both Sri Lankan openers failed in their second innings and left the score at 2/1, but the hosts were doing reasonably at 50/2 before O'Keefe orchestrated a dramatic collapse with the dismissal of Gunaratne for 23.

The Sri Lankan XI then lost seven wickets for just 33, with O' Keefe claiming 10 for the match and fellow spinner Nathan Lyon 2-14 from five overs, as Australia marched to victory by an innings and 162 runs.