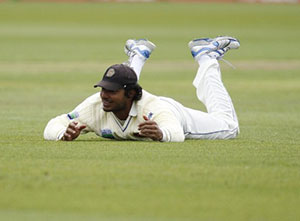 It is clear that cricket in Sri Lanka is in a deep crisis. A spate of resignations — selectors, captain and vice captain — followed Sri Lanka’s World Cup final defeat to India. The cricket board (SLC) is also said to be in debt. With empty coffers, it is unable to pay its employees and renew player contracts.

Furthermore, a top player of the ODI team is facing drug allegations.

Now, the selectors are adding their share to the mess.

Sri Lanka started the tour of England without the two senior pros Mahela Jayawardena and Kumar Sangakkara. They were allowed to play the Twenty20 IPL in India. The argument was that the experienced duo could adjust to the longer version of the game played on different pitches, in different conditions, with the red ball in double quick time. Therefore, they came to England quite late; only in time for the second practice match against England Lions.

Everyone saw how the famous duo struggled. Although Sri Lanka managed to win that match, after being asked to follow on, the duo had a miserable outing with the bat. To Sri Lanka’s great disappointment, they failed in the next match too – the first Test in Cardiff. England rolled Sri Lanka in the second innings for a pathetic 82 and won the match by an innings to the surprise of everyone.

And Sri Lanka’s biggest misery was the famous duo’s sorry form once again. The team banked on them, but they disappointed everyone.

Meanwhile, in the middle order, Thilan Samaraweera continues to expose his weaknesses against quality seam bowling.

The question now is: what did the selectors expect by taking talented youngsters like Dinesh Chandimal and Lahiru Thirimanne on tours and allowing them to sit on the bench?

It’s no secret that the selectors put undue pressure on Prasanna Jayawardena, who is considered the best wicket keeper the country possesses. This time, they included another keeper in the squad, and by playing only six batsmen in the Cardiff Test they placed added pressure on Prasanna. He batted at number six – one up from his customary position.

What did Prasanna do? He came up with a century, scored under pressure, after the exit of the famous duo. Why don’t the selectors exert such pressure on other players?

Sri Lanka’s bowling at Cardiff, too, came to the fore, for all the wrong reasons. Did the selectors pick the best available pacemen for England? Did they consider the current form of the bowlers and their past performances in England? What about the fitness level of the players?

Sri Lanka’s new ball bowlers cut a sorry figure. They sprayed everything outside off and failed to draw openers to the front foot, where the chances of nicks are. A labelled ODI bowler (Thisara Perera) opened bowling.

Bowling fast and getting the movement off the seam are two different things. The English bowlers managed both, whereas the Sri Lankans failed. England knew the art of polishing the ball – one man (Alastair Cook) being in charge of it. They maintained the shine maybe till the 50th over. In contrast, three Lankans were seen shining the ball and often by the 15th over the ball looked old, and that denied the new ball bowlers sting. 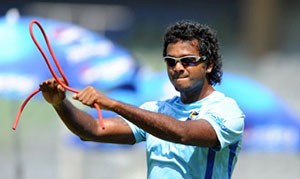 Dilhara Fernando is the most experienced bowler in the squad, but how many premier league club matches did he play this season? None. In the past three months he has often functioned as a net bowler, warming the bench for Sri Lanka during the World Cup and for Mumbai Indians during the IPL. What form does he have?

How many domestic matches did Suranga Lakmal play in the recent season and how many long spells did he bowl?

Youngster Nuwan Pradeep Fernando is one of the fastest bowlers in Sri Lanka. Unfortunately, he picked an injury and returned home. But chairman of selectors Duleep Mendis, I’m sure, didn’t know that Nuwan Pradeep was not even fit to play three consecutive three-day matches for his club, before the tour of England.

Farveez Maharoof was drafted into the side simply because he happened to be in England. When the squad was first chosen, he was not thought of. Now, there is a concern about his form and fitness. Why couldn’t they pick a replacement for the injured bowler from Sri Lanka? A bowler like Nuwan Kulasekera who can move the ball both ways, or a speedster like Dhammika Prasad would have been idle for England.

Spinners Ajantha Mendis and Rangana Herath have failed to deliver the goods. Mendis clearly struggled in his county stint recently and Herath in two county seasons failed to do much. Besides that, he has struggled outside Sri Lanka. If the selectors wanted a good spinner, who has done well in England, the right man should have been leg spinner Malinga Bandara, who had had two successful county seasons. There is also the tall left arm spinner Sajeewa Weerakoon, who recently emerged as the best bowler and the highest wicket taker in the domestic season.

Sri Lanka played Herath in the second Test simply because Kevin Pietersen is struggling against left arm spinners. But what about the tall off spinner Suraj Randiv? He could have been effective against four left handed batsmen in the English ranks. Didn’t the selectors know?