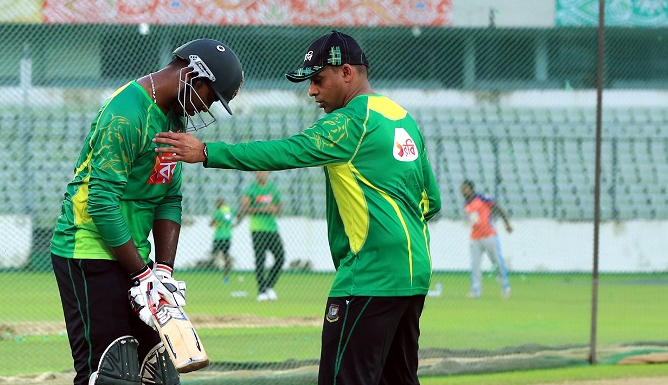 Thilan Samaraweera has been hired by Bangladesh as a batting consultant. © BCB

One of Sri Lanka's most successful coaching exports Chandika Hathurusingha has teamed up with Thilan Samaraweera in Bangladesh.

At a press conference in Mirpur, Samaraweera was full of praise for his former mentor and spoke glowingly of both his personal impact on his career and his ability as a coach.

"I divide my career into two," Samaraweera said. "First, it is from 2001 to 2006 when I was dropped. I became a totally different player when I met Chandika.

"I know what he is capable of and I would love to work with him. He gave me the freedom to express myself. He focused on the technique and mindset, the key to international cricket. I became a totally different cricketer. I think my average was close to between 50 or 60."

Bangladesh coach @CHathurusinghe turns back the clock in the Mirpur nets today. Bats for a while with the players cheering him on. pic.twitter.com/dWD99rqPH4

Samaraweera, who also recently worked with Cricket Australia as a batting consultant, again praised Hathurusingha's emphasis on freedom when it came to the Bangladesh side, saying it was a vital key in their development over the past 18 months.

"I think the freedom that the coaching staff led by Chandi gave to the Bangladesh players made them believe they could fight against the top teams," he said. "You can see in the last 18 months they beat Pakistan, India and South Africa and they also did well in the World Cup in different conditions.

"More freedom, belief and support from senior to younger players are what a team requires. I think more about the mental toughness, and I can see how much they have changed over the last 18 months in terms of the technical aspects."

Samaraweera has been hired on a short-term basis for the upcoming series against Afghanistan and England. It will be a significant challenge for the former middle-order batsman, as the Bangladesh side have not played international cricket since the WT20 in March this year.

Sri Lankan coaches are in demand, with former Sri Lanka captain Duleep Mendis coaching the up-and-coming Oman, Pubudu Dassanayake coaching USA and spin legend Muttiah Muralitharan in India assisting the Cricket Association of Bengal after his stint with the Australian cricket team. Mahela Jayawardene too has had two stints with the England and Wales Cricket Board.