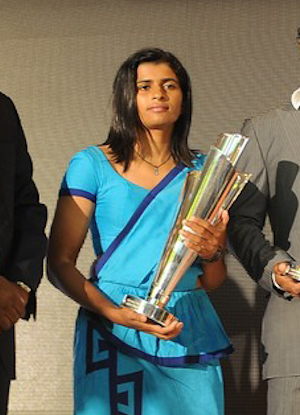 Sri Lanka captain Shashikala Siriwardena is confident of a change of fortunes for her side during the upcoming ICC Women’s World Cup 2013 in India.

Siriwardena believes her side’s bowling attack gives her hope of a good show at the tournament that begins on January 31 in Mumbai.

"We couldn’t do well at the ICC World Twenty20 due to our batting failure. It was tough to lose like that on our home soil," Siriwardena said.

"We believe in our potential and are confident of doing well. What gives us hope is our previous performances and winning ratio in ODIs.

"I have a lot of belief in our bowlers, as they have proved themselves throughout the year.
"Considering our previous performances, adapting to the fifty-over format will also not be an issue."

Sri Lanka is currently involved in a domestic one-day tournament and the side may also play a few practice games against a few boys’ sides before they travel to India for the tournament.

Playing in India will be a challenge and Siriwardena is confident that her side can live up to the challenge at hand.

"We haven’t played in India since the 2006 Asia Cup. I remember us doing well there," she said

"Playing in Asia always feels like we are at home. Whatever the conditions, we have to adjust as soon as possible, hopefully it will be much easier to adjust in India than any country."

Sri Lanka is drawn in Group A alongside England, West Indies and host India, and they begin their campaign against defending champion England on February 2 at the Wankhede Stadium, which was the venue of the ICC Cricket World Cup 2011 final.

"We haven’t played that much against England, but we are hoping to do our best against them," the Sri Lankan captain added. "Charlotte Edwards, Sarah Taylor, Katherine Brunt and Laura Marsh are the ones to watch out for.

"We haven’t won any match against India so far, but [we] have fought well and had a few close games earlier in ODIs. We all know Mithali Raj, Jhulan Goswami and Poonam Raut are [India’s] key players.

"We have a good record against West Indies in ODIs, a 60% winning ratio. So we have confidence of doing well against them. Stafanie Taylor, Deandra Dottin, and Anisa Mohammad are the key players in the side."

There will be quite a few new faces added to Sri Lanka’s squad for the tournament, considering the change in format:

"Chamari Athapattu is a top order batter who has huge potential of playing hard and long innings. Chamani Senevirathne is an experienced all–rounder, then there is left-arm spinner Inoka Ranaweera who did very well in the ICC World Twenty20 and Asia Cup 2012," said Siriwardena, summing up her squad.

The tournament will also be Siriwardena’s third as a player, and the Sri Lanka captain is keen to make it count for the team.

"It’s a great thing to play in a World Cup as it means a lot to me," the 27-year-old said. "This might well be my last and I will definitely try my best to make something special for my country.

""When I started my cricket career, my dream was to play a World Cup. Winning the title was my next target. So I am still trying my best to win this and if that happens it will the biggest moment in my life."