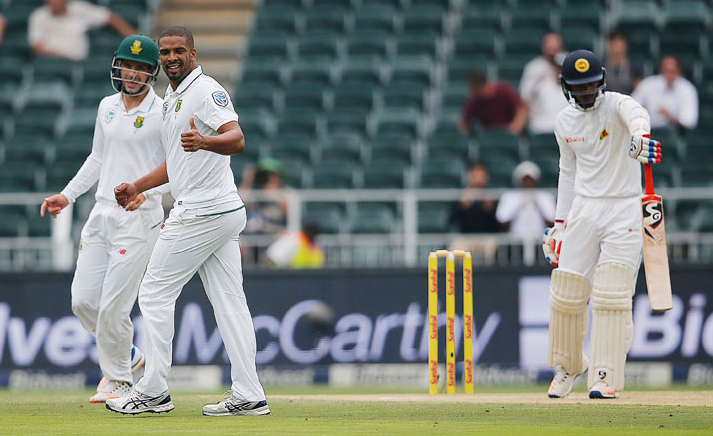 Sri Lanka are trailing by 346 runs and have six wickets in hand. © AFP

Sri Lanka fought back with the ball on the morning of day two but fell to 80/4 by stumps to quickly surrender any momentum they had found during the day.

After South Africa had begun the day on 338/3, Sri Lanka took seven wickets for 88 to keep the South African total somewhat under control. Nuwan Pradeep took 4-78 and Lahiru Kumara, with 4-107, were the standout bowlers.

But those figures disguise how unlucky Suranga Lakmal was. By far Sri Lanka's best bowler in the series, he had a miserable day one when centurion Hashim Amla was dropped on five in his hundredth Test. Day two only got worse for the poor paceman, with run out opportunities missed and Kusal Mendis dropping the vital wicket of Faf du Plessis.

Angelo Mathews also put in a marathon effort, bowling a personal record of 20 overs and adding the scalp of nightwatchman Duanne Olivier to his overnight wicket of Stephen Cook.

Olivier was the first to go for the day, caught behind by Dinesh Chandimal after a 24-ball stay. South Africa's skipper du Plessis stitched up an 18-run stand with Amla, in which he scored all but two runs before Mendis took his second chance at snaffling up his edge, with Pradeep this time the grateful bowler.

Temba Bavuma continued his horror run in this series, falling for a second-ball duck by edging Pradeep to Kaushal Silva at third slip. Having not made double-figure scores all series after a consistent tour of Australia, Bavuma will be beginning to feel there may be pressure on his place with the return of Ab de Villiers looming.

Amla fell three runs later for a magnificent 134, caught behind off Pradeep after 391 minutes at the crease. Following him back to the pavilion were all doubts about his form. Even if Sri Lanka fightback to draw, or possibly win this Test, one can be certain Amla's 100th Test will be a memorable one for 'Amla's Army'.

Vernon Philander was the second man to fall to Pradeep for a duck, but then Quinton de Kock added 47 with Wayne Parnell (23). The dangerous de Kock scored a measured 34 by his standards. A strike rate of 66 is by no means slow, but when you have a modern day Adam Gilchrist in your side, it could certainly be considered measured.

With South Africa wrapped up for 426, Dimuth Karunaratne and Silva must have had flashbacks to their horror tour of Australia, where they failed to put on a single opening partnership of note. Philander removed Karunaratne for a third-ball duck, in what might have been the worst possible start.

Mendis and Silva then added 47, with the younger Mendis dominating and once again impressing on foreign soil. But, once Silva went, caught behind off Kagiso Rabada for 13 from 42 balls, as has happened many times this series, Mendis soon followed. All too often we have seen Mendis make a promising start, only to see the dismissal of his partner shake him up and throw away his wicket.

Mendis had struck 41 off just 58 balls, including a hit over the ropes, but it all came undone when he fell to Rabada, with JP Duminy this time snaring the edge in a hungry slips cordon. At 62/3 it was not looking good for the visitors, and it only got worse eight runs later when Dhananjaya de Silva was caught slashing a drive to Bavuma at point for 10.

Mathews and Chandimal, the two most experienced batsmen in the team, now remain unbeaten at the crease with their partnership on 10. Much rests on their shoulders if Sri Lanka are going to have any hope of saving this match. If they can somehow scrape Sri Lanka's score to a respectable 300, and Rangana Herath is able to restrict South Africa to a manageable total, the Test match portion of the tour may still have a happy ending.

But the way South Africa have been going of late, along with Sri Lanka's penchant for early morning collapses, the likelihood of that scenario ever happening looks some distance off, for now at least.