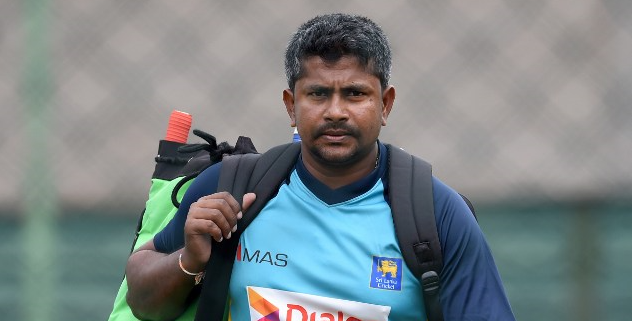 Every time Sri Lanka's indefatigable spin-veteran Rangana Herath is reminded he is on the doorstep of retirement and about to be resigned to obscurity, he surprises again with a match or series-winning performance. Ahead of Australia's tour of Sri Lanka, he is again desperately needed.

Herath is a mild-mannered, diminutive bank clerk in one life and one of the most fiery and combative cricketers on the planet in another. Last year, during the first Test in Galle after Dinesh Chandimal had given his bowlers something to defend with a knock of 162, there was no hiding the pumped up adulation of Herath, when he claimed the prized scalp of India's Rohit Sharma.

Having only a relatively modest total of 176 to defend, Herath bowled a stunning delivery that pitched on leg, only to turn a mile and clatter into the destructive Sharma's off stump. Herath gave his customary jubilant fist pump, and from there, there was no stopping the man. Herath snared 7/48 and masterminded India's demise, as Sri Lanka took a completely unprecedented 63-run win on Indian Independence Day to spoil the visitor's party.

And just recently in England, Herath demonstrated courage and fight with the bat. With Sri Lanka staring down the barrel of another humiliating defeat in the second Test, the 38-year-old toughed out 99 deliveries for a knock of 61, partnering with Chandimal for a 116-run stand that allowed the former to reach a rare Test century outside of Asia. Thanks to Herath surviving a barrage of bouncers from the likes of Stuart Broad, James Anderson, Chris Woakes and Steven Finn, without so much as flinching, Sri Lanka reached a face-saving total of 475 and forced England to bat again.

Now, with pundits on both sides of the Indian Ocean predicting a heavy defeat for the hosts ahead of Australia's tour of Sri Lanka, fans of the home side will be desperate for Herath to again shake off the shackles of an ageing body and reverse his side's fortunes.

Herath's success is remarkable, given the pressure that he is under to constantly take wickets and deliver results. Thanks to the slow pitches of Sri Lanka, fast bowlers are forced to rely on a steady line and length, finding success by tiring batsmen out and inducing mistakes. Therefore, Herath's ability to penetrate the opposition line up with quick wickets at home becomes all the more important.

It is, and will remain, a heavy load for the man to bear but it would be a fool who writes off Herath's potential impact for Sri Lanka during this series.

With the exception of an ODI and T20I series against India, Australia are starved of practice against spin. Having most recently played Test series against West Indies and New Zealand, as well as an ODI series with South Africa and the Windies; and being a reasonably young side, Australia are well short of recent experience against slow bowling. This will allow Herath to unleash his bag of tricks against the visitors.

Australia's captain Steve Smith, Usman Khawaja and Joe Burns — aged 27, 29 and 26 respectively — are all something of veterans in the batting line up but Mitchell Marsh, Peter Nevill and Moises Henriques would all be fairly unfamiliar with Sri Lanka's bowlers, let alone the skill of a world-class performer like Herath.

Burns would have seen very little of Sri Lanka's bowling attack, and his fellow opener David Warner has shown signs of weakness against spin during the start of his innings. The opening combination will not give Herath nightmares, as he accustomed to doing a stellar job with the new ball, particularly late in the day. He will relish the opportunity to draw first blood against Warner and Burns.

Perhaps the biggest challenge for Herath to counter is the threat of Aussie skipper Smith, who has been their shining light with the bat over the past two years.

Smith has been scoring runs as if for fun recently, having been awarded the Sir Garfield Sobers Trophy in 2015, given by the ICC to the Cricketer of the Year. Being exceptionally light on his feet, Smith is superb against spinners. If Herath wins the battle against the New South Welshman, it will be no easy feat.

It would be a remarkable accomplishment indeed if Herath can spin Sri Lanka to victory, but if he were to sign off his career with a famous swansong against one of Sri Lanka's greatest rivals, a nation will remain forever indebted to their little bank clerk.