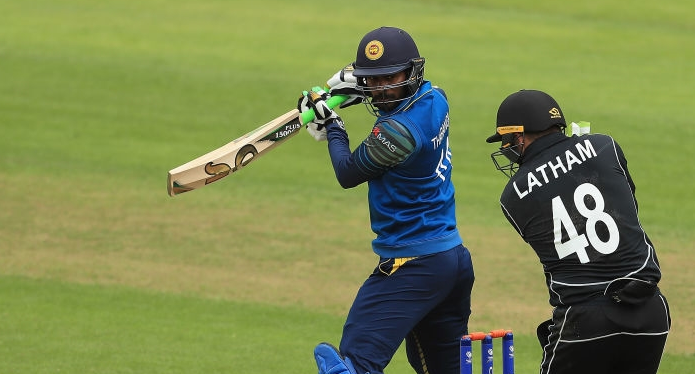 Sri Lanka's batting has clicked in recent times and holds the key to being competitive in this tournament. © ICC/Getty

South Africa arrived in England with high hopes of a successful ICC Champions Trophy campaign, buoyed by a strong showing in the ICC Cricket World Cup 2015, its last 50-over ICC event outing, and by the fact its team boasts prodigious talent in all departments.

That confidence would have been dented somewhat in the past 10 days after losing its first two ODIs to England, justly one of the tournament favourites with its very strong and well-balanced side. However, although no doubt disappointed to lose that series, at least, it will have recovered some confidence by the emphatic manner in which it won the final ODI.

Sri Lanka, meanwhile, arrived in England as clear underdogs: richly talented, but youthful and inexperienced. Promisingly for it, however, it has begun in its batting to show the form and runs that are needed to progress in major tournaments.

Sri Lanka has managed to put the early-tour shock loss to Scotland behind it and its batting has progressed leaps and bounds. Yes, it ultimately suffered narrow defeats to Australia and New Zealand in the warm-up matches, but I think the team management will have been more concerned about the performance than the result.

South Africa is a balanced and seasoned ODI side, full of exciting young talent and experienced performers.

In Quinton de Kock, it has a brilliant opener who has time and again provided the Proteas not just with brisk starts but also innings of substance that have won the team games. With his solid ability behind the stumps, he is the find of recent times for me for South Africa.

With the likes of Hashim Amla, Faf du Plessis, AB de Villiers and David Miller filling up the rest of the top order, the Sri Lanka bowlers are faced with a daunting task ahead of themselves.

Matching their batting might are the South Africa bowlers with Kagiso Rabada being the stand-out performer. He is a real handful with the ability to bowl close to 150mph with the expertise to exploit any advantage in overhead conditions in England. He also has a devilishly quick bouncer and a very dangerous Yorker. He's the spearhead of a very varied and able set of bowlers who are one of the strongest attacks in the tournament.

For Sri Lanka, it is going to be very important that the experienced duo of Lasith Malinga and Nuwan Kulasekera play a lead role and are able to inspire the Sri Lanka bowling attack to be effective and smart, quick to adapt to the conditions and match situation they are facing. Their ability to exploit the new ball and be effective at the death will be crucial when looking to restrict the strong South African batting.

Lasith and Nuwan will be well-supported by Suranga Lakmal, Thisara Perera and Angelo Mathews — depending on the final selection — in the seam department and then with the spin of Seekkuge Prasanna and Lakshan Sandakan, the young Chinaman bowler who can be a really potent weapon for Angelo in terms of providing the attack with some guile and mystery.

The greatest strength though of this Sri Lanka team is its batting. This is where it is going to win games and this is why it will have been pleased to see it adapting well to conditions thus far.

In English conditions with two new balls being used, a lot of responsibility rests on the shoulders of the openers. It is critical that they are able counteract the early movement and swing with both defence and attack. When the top order is able to provide a solid base, with one of the top four batsmen batting deep into the innings, Sri Lanka is a powerful batting threat.

While Sri Lanka has some really exciting new batting talents in terms of players like Niroshan Dickwella and Kusal Mendis, both of who have great futures ahead of them, I still expect the senior trio of Upul Tharanga, Dinesh Chandimal and Angelo Mathews to provide the bulk of the runs.

Personally, I think Asela Gunaratne is an exceptional batting talent with the rare ability to bat with intelligence and awareness under pressure and to be the batsman to finish games for the team. He is going to be a player to watch in the middle order.

Although on form, South Africa is the stronger team and is expected by the pundits to beat Sri Lanka quite comfortably, this is a Champions Trophy event and I know the Sri Lanka players love a challenge. They come into the tournament with far less pressure, which could be helpful. With their recent batting form and their ability to rise to the occasion of these events, playing a brand of expressive and explosive cricket, they will be believing they can pull off an early upset.