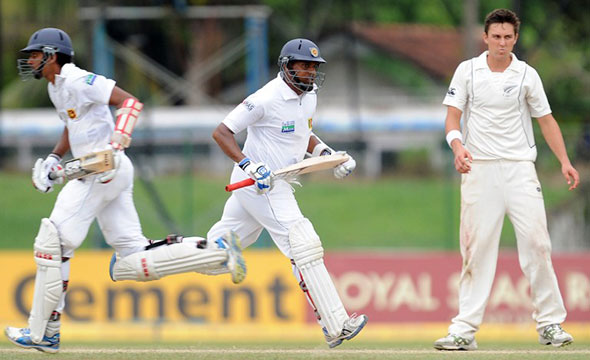 Gloomy overhead conditions and fading light forced the umpires to call off play, with 25 overs still remaining in the day, during the third day of the second Test match between New Zealand and Sri Lanka at the P. Sara Oval in Colombo.

The hosts are still trailing New Zealand’s first innings total of 412 by 187 runs with four wickets in hand and are currently 225/6. Thilan Samaraweera (76) and Suraj Randiv (34) remain unbeaten at the crease.

Sri Lanka began the day in dire straits at 43/3 after Tillakaratne Dilshan, Kumar Sangakkara and Mahela Jayawardene were dismissed in quick succession at the end of the second day’s play.

By lunch on the third day, the home side were in more trouble after overnight batsmen Angelo Mathews (47) and Tharanga Paranavitana (40) had perished short of their half-centuries. Shortly after, Sri Lanka lost wicket-keeper Prasanna Jayawardene for 12.

Randiv and Samaraweera combined to put on a dogged partnership of 97 for the seventh wicket to see Sri Lanka past the follow-on mark of 213.

Paceman Tim Southee recorded figures of 4/51 and was the pick of New Zealand’s bowlers, while Trent Boult and Jeetan Patel took a wicket each for the visitors.

Play is expected to start half-an-hour early on day four to make up for the time lost today.

Sri Lanka lead the two-match series 1-0 after their 10-wicket victory in Galle.