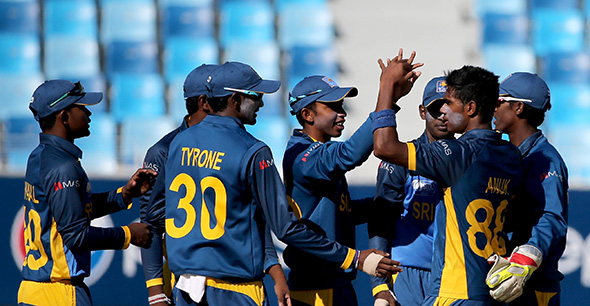 Sri Lanka Under-19 won all three of their group matches. © IDI/Getty Images

Undefeated Sri Lanka Under-19 will play Pakistan Under-19 in the quarter-final of the ICC U19 Cricket World Cup at the Sharjah Cricket Stadium in UAE on February 22.

Sri Lanka opened the tournament with a 49-run victory over New Zealand and then went on to beat England by one wicket, before romping home by eight wickets against the UAE in their group matches.

"We have been practising well and won all our three matches, but Pakistan is a good team and it has a good top-order line-up including its captain," Sri Lanka skipper Kusal Mendis said.

"We got good confidence after beating England and New Zealand, as both are very good sides."

Pakistan’s Imam-ul-Haq is the tournament’s leading run-getter to date with 260 runs, while his fellow opener and team captain Sami Aslam is the other prominent scorer with 129 runs. The two batsmen have provided their side two century opening stands. In bowling, Karamat Ali has bagged seven wickets while Zafar Gohar has taken six wickets.

Sri Lanka openers Sadeera Samarawickrama and Hashan Dumindu have been in good touch. Samarawickrama has scored 156 runs, while Dumindu has aggregated 147 runs — both batsmen have centuries against their names. With seven wickets, fast bowler Anuk Fernando is Sri Lanka’s most successful bowler, followed by Binura Fernando who has picked up six wickets.

Head-to-head at the ICC U19 Cricket World Cup, Pakistan leads Sri Lanka by 3-1. The two sides last met in the 2010 event in New Zealand, where Pakistan won by five runs.