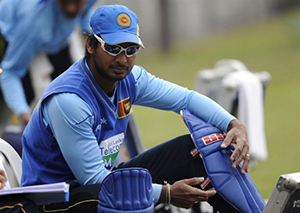 October 23, 2010 (Island Cricket): Speaking to the media in Australia, Kumar Sangakkara, said that he was satisfied with his team’s batting performance that led to the demolition job against the Queensland Bulls yesterday.

Batting first in their practise match against Queensland, Sri Lanka piled on 301 runs in a devastating display of batting on a surface that the Australian camp had hoped would soften the islanders up ahead of the opening game against Australia on October 31. Instead, led by a magnificent century from Sangakkara, the visitors gained much needed practise in conditions alien to them, and more importantly the entire squad has gained in confidence.

Sangakkara appeared elated when he was informed that the surface on which he had just punished the Queensland Bulls on, was perhaps the toughest track that was on offer on this tour.

"If that’s true, it’s even more heartening, but everything is different each game you play, so we can’t just take this for granted and say that this was a great performance," the skipper said.

"We can’t make this a one-off performance, this is the sort of consistency we look for every time we go out to play, so a lot of brushing up to do, a lot of hard work in the nets, and hopefully there are little areas we can get better in."

The massive 112 run victory comes even sweeter for the Sri Lankans knowing that they did not play their full strength side. But for Sri Lanka’s next match against New South Wales on Oct 24, Sangakkara said that he will most likely playing his best side, which will include Muttiah Muralitharan, Tillakaratne Dilshan, Lasith Malinga and Mahela Jayawardene. All of who, the skipper says, will be "fighting for that game."

"I think they’ll all be fighting for that game, and we’ll probably play our full team there.

"All credit to the guys who played today, even though some of them might miss out on Sunday, I think they haven’t done anything wrong to be left out of the team. We’re trying to build a mood where everyone is looking to contribute in a good way, and everyone’s united and working towards one goal, but at the same time understanding that performance counts every time they go out."