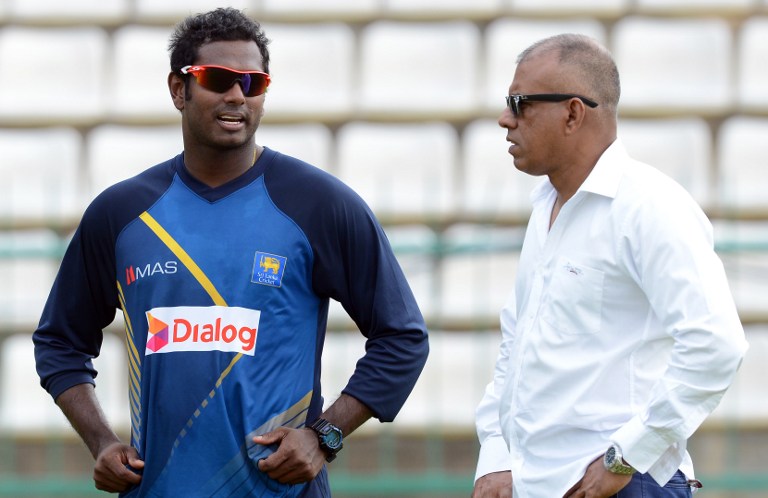 Sri Lanka's cricket board lodged a complaint Monday with the visiting Australians after their bowling consultant and local legend Muttiah Muralitharan was involved in a bust-up with his former colleagues.

On the eve of the first of three Tests, board president Thilanga Sumathipala accused Muralitharan of insulting Sri Lanka team manager Charith Senanayake in a row over the Australians' use of a practice pitch in Colombo.

"Muralitharan's behaviour is unacceptable and we have brought this to the notice of the Australian team management," Sumathipala told reporters. "It should not have happened. We are very disappointed."

Sumathipala said Muralitharan had bullied groundsmen at the Pallekele Stadium on Saturday into allowing the Australians to practise there when it was theoretically off limits to both teams.

"He rode roughshod over the groundsmen and got his (Australian) players to practise in violation of the time stipulations," Sumathipala said. "He later confronted our team manager (Senanayake) and abused him."

Muralitharan is a national hero in Sri Lanka after taking 800 Test wickets, still a world record some six years after his retirement. But his decision to lend his local expertise to the tourists has raised eyebrows, not least because the 44-year-old was once labelled a "chucker" by Australia's then-prime minister John Howard.

Stung by criticism on social media, Muralitharan recently posted a video on YouTube in which he defended his decision to help the Australians as a freelance bowling consultant.

"I am doing a professional job," said the 44-year-old former spinner. "I am not a traitor. Sri Lanka has not tried to make use of my services, so I am helping the Australians who value my contributions."

Senanayake refused to comment but a source close to the team said the manager and Muralitharan had exchanged words on Saturday at Pallekele stadium, on the outskirts of Kandy, which is hosting the first Test.

Sri Lanka cricket chief Sumathipala said it was ironic that Muralitharan was coaching a team from Australia given his history.

"Professionally it is okay for Murali to coach any foreign team, but the irony is that he is supporting Australia which tried to get him out of cricket," Sumathipala said. "He is creating long-term damage for himself among his fans."

During an 18-year Test career, Muralitharan — who was born with a partially deformed elbow — was twice cited by Australian umpires for a suspect action but he was cleared both times by the game's governing body.