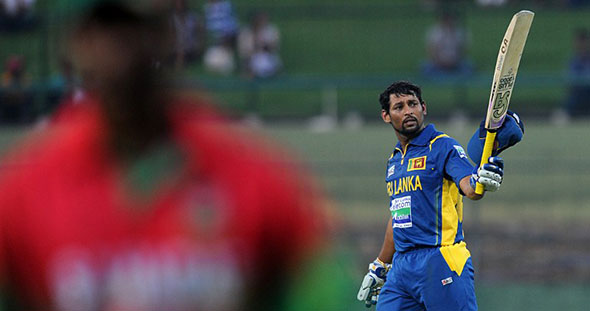 Tillakaratne Dilshan made his second century in the series. © AFP

After winning the toss and batting first, Sri Lanka made 302/9 in 50 overs against Bangladesh in Pallekele in the third and final ODI of the series.

Top-scorer for the hosts Tillakaratne Dilshan made his 16th ODI hundred (125), while his opening partner Kushal Perera (56) and Kumar Sangakkara (48) also contributed.

Sangakkara reached 11,000 ODI runs during his knock, and became only the second Sri Lanka to have reached that milestone.

However, Lahiru Thirimanne’s 25 not out off 15 balls, including two sixes, helped Sri Lanka negate a lower-order collapse and saw them past 300.

Abdur Razzak was the visitors’ highest wicket-taker, and finished with 5/62 off 10 overs. The 30-year-old left-arm spinner reached 200 ODI wickets after taking his fourth career five-wicket haul.