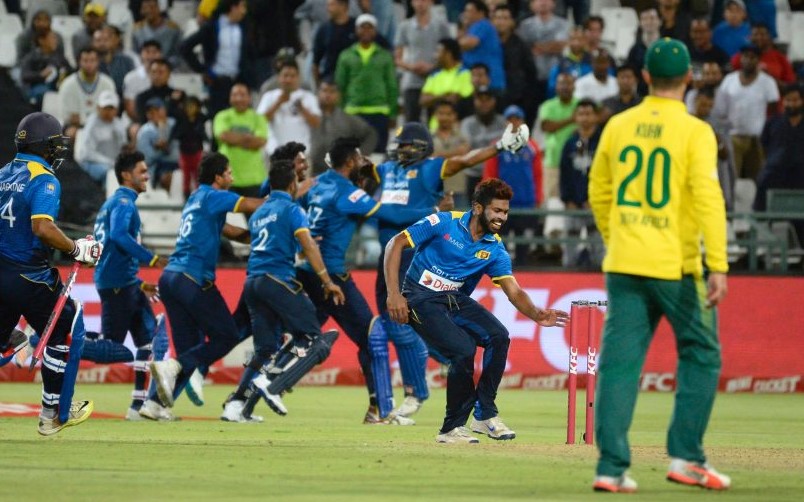 It was a thrilling end to the series and a rewarding win for Sri Lanka on what has been a tough tour. © Getty Images

Sri Lanka put in an excellent all-round performance in the third and final T20 against South Africa in Cape Town on Wednesday to claim a 2-1 series win following their poor showing in the Test series.

The Man of the Match and Man of the Series, Niroshan Dickwella, top-scored with 68 to guide Sri Lanka to a chase of 170 with five wickets in hand in the series decider. Dickwella, who made 133 runs in the series at a strike-rate over 150, was the only batsman from either side to score more than 100 runs in the three-match series.

After a lengthy absence from injury, AB de Villiers returned for the hosts who won the toss and chose to bat. He more than proved his worth after being away for so long, top scoring for the Proteas with 63 off 44, and his runs were made in typically attacking fashion, inclusive of a couple of fours and three sixes.

Despite de Villiers's pyrotechnics, it still took a cameo of 32 from just 15 balls from wicket-keeper Mangaliso Mosehle to get South Africa to a challenging score. Mosehle struck three sixes in the final over, with South Africa struggling prior to that.

It was an arm wrestle. Sri Lanka constantly chipped away at the wickets, while the South African batsmen strung together frustrating partnerships in defiance.

After Seekkuge Prasanna removed Jon-Jon Smuts, leg-before for 19 to leave the score at 36/1, Reeza Hendricks and de Villiers then added 71 for the second wicket in quick time.

Lakshan Sandakan impressed yet again, removing Hendricks for 41 off a sharp stumping from Dinesh Chandimal.

Asela Gunaratne then dismissed David Miller for a single — his first failure of the limited-overs portion of the tour.

Proteas captain Farhaan Berhardien was run-out for six before de Villiers was caught by Upul Tharanga off Nuwan Kulasekara for 63.

South Africa were now struggling at 135/5 in the 17th over, and they needed thee huge blows from Mosehle to get them to a challenging score.

Kulasekara took 1-11 in his last two overs, including the key wicket of de Villiers, and prevented the Proteas from going after a huge total in the last six overs.

Sri Lanka started better than they had in the last match, adding 36 for the first wicket.

Upul Tharanga, who will captain Sri Lanka in the ODI series coming up, was the first to go. He fell for 20 from 11 balls, caught by Berhardien off Wayne Parnell.

The South Africans suffered their first blow when they lost Lungi Ngidi to an injury. He bowled only two overs after falling heavily on one of the side pitches, which was damaging for the Proteas but nowhere near as detrimental as their poor fielding. They dropped a number of catches.

Acting as stand-in captain during the absence of Angelo Mathews, Dinesh Chandimal was dismissed for only five. Chandimal was bowled by spinner Imran Tahir, with Sri Lanka now in trouble at 45/2.

Dickwella was untroubled though, adding 71 with Dhananjaya de Silva (19), but both batsmen benefited from grassed chances.

In Parnell's second over, the Proteas dropped three consecutive catches — de Silva was dropped on three and then Dickwella on 19 and again on 23.

Tahir claimed his third wicket, when he had de Silva stumped and Dickwella caught by Berhardien.

South Africa were now on top at 118/4, and when Kusal Mendis was run-out for just two in the 17th over, Sri Lanka were suddenly in need of something special to avoid defeat.

It came from Prasanna, who has fashioned himself into a dangerous all-rounder of late. Prasanna struck 37 not-out from just 16 balls, hitting three boundaries and three massive sixes.

He was ably supported by Asela Gunaratne (11 not-out), who smashed two fours in the final over to take Sri Lanka home with a ball to spare.

It was a morale-boosting victory for the visitors, which is their first series victory of any kind on South African soil, and it's especially sweet after the drubbing they received in the Test series.

Both teams next head to Port Elizabeth for the first ODI of the five-match series, which begins on January 28.