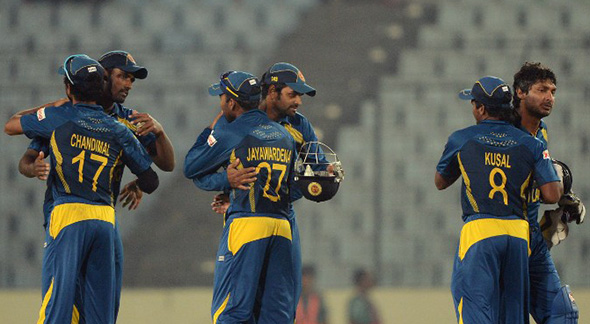 Sri Lanka have secured a berth at the Asia Cup final after defeating Afghanistan by 129 runs today in Mirpur.

Angelo Mathews’ men earned a bonus point by defending a modest total of 253-6 successfully to see minnows Afghanistan, who surprised many recently by beating Bangladesh, collapse to 124 all out in 38.4 overs in their run chase.

Kumar Sangakkara surpassed 1000 Asia Cup runs during his innings and top-scored with a patient 76.

"It was tough to bat out there," Sangakkara, who was awarded man of the match for his efforts, told reporters after the game. "We needed a good start, so we had to spend some time to build a foundation. It was a hard wicket, little slow, and timing the ball well was important."

Sri Lanka are thus far undefeated in the tournament after having beaten India, Pakistan and Afghanistan, and now have one match remaining against hosts Bangladesh on March 6 prior to Saturday’s final.

The final of the Asia Cup takes place on March 8 in Mirpur, and Pakistan are favourites to qualify. If Pakistan defeat Bangladesh in their next match, they will secure their place in the final.