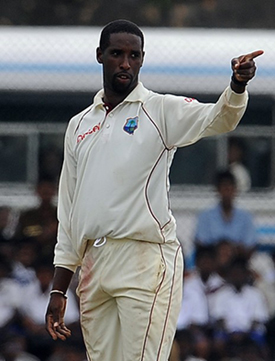 November 22, 2010 (Island Cricket): Sri Lankan captain, Kumar Sangakkara, spoke highly of Shane Shillingford’s ability with the ball ahead of the second Test starting November 23 at the R. Premadasa Stadium, but maintained that his side would be better prepared to counter Shillingford in Colombo than they did in Galle.

"He has got a lot of variation and bounce, but I thought our guys played him for the first time pretty well," Sangakkara told reporters in Colombo.

"As we go along I think we’ll probably look at him a bit more and see how better we can adjust our game plan to him."

Shillingford was reported for a suspect bowling action at the end of the first Test, but will be allowed to play.

"From what we have been told, he can play, and he comes into our thinking as normal, as we look ahead to the match," West Indies’ coach, Ottis Gibson said.

"We are building towards doing well in the second Test, as we did in the first Test. As a team we are looking forward to the upcoming match.

"Shane bowled very well for us in the last Test, and he’s a key part of our bowling unit."

While Sri Lanka look to counter Shillingford, the West Indies will have another trump card up their sleeve with the return of left arm spinner, Sulieman Benn.

Benn, not available for the first Test in Galle due to a suspension he was serving, will return to the side strengthening an already strong bowling unit which managed to enforce a follow-on against the hosts.

Sri Lanka have discarded their two fast bowler who opened bowling in Galle and brought in Nuwan Kulasekara and uncapped Shaminda Eranga. But Kulasekara is likely to be selected with either Dilhara Fernando or Suranga Lakmal, who will make his debut if selected.