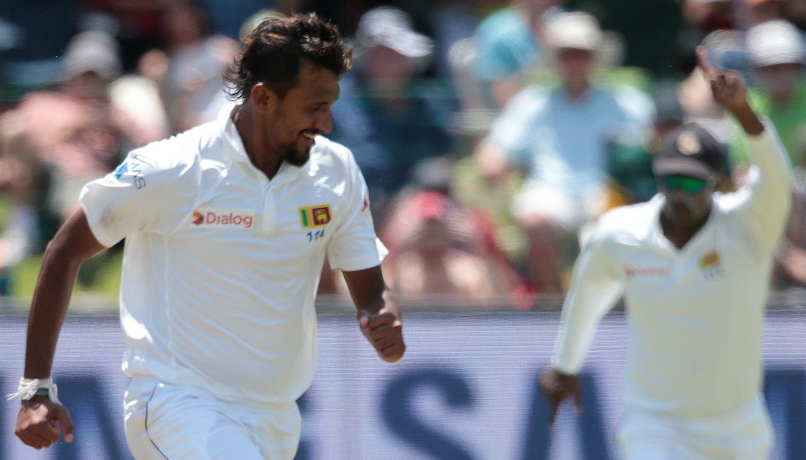 Suranga Lakmal's four wickets on the opening day of the Boxing Day Test has given the visitors an early advantage. © AFP

Suranga Lakmal took career-best bowling figures to lead a challenging Sri Lanka performance on the opening day of the Sunfoil Test Series against the Standard Bank Proteas at St. George's Park on Monday.

He finished the day on 4/62 from 23 whole-hearted overs and surely deserves to collect his first five-wicket haul at this level when the Proteas resume on Tuesday morning on 267/6.

Lakmal bowled disciplined away swing and also exploited the movement and bounce that the pitch offered and could easily have had an even better return. There was not a single South African top-order batsman who did not play and miss at him on several occasions and, when the batsmen did nick, the fielding and catching of his team mates was exemplary.

All four his wickets came from catches in the cordon behind the stumps while veteran Rangana Herath used his guile and pace variations to account for the other two with successful leg before wickets decisions against JP Duminy and Temba Bavuma.

Having won the toss and opted to bat first, the Proteas may be disappointed with their first day total but they do still have Quinton de Kock and Vernon Philander at the crease who have contributed significantly to lower order contributions in recent times. It is also a fact that the Proteas do not have a genuine No. 11 in this side.

The disappointment would spring largely from the fact that they did not kick on after Stephen Cook and Dean Elgar shared their first century partnership (104) since they became the regular opening pair.

But most of those runs came in the morning session (the Proteas were 92/0 at the first interval) when much of the Sri Lankan bowling was wayward in support of Lakmal. Things improved a lot when Angelo Mathews entered the attack to provide pressure from both ends and it was significant that the Sri Lankan captain took the second new ball rather than giving it to one of Nuwan Pradeep and Dushmantha Chameera who between them conceded 116 runs in 34 overs without success.

Apart from the opening stand the only partnership of note was the 73 for the third wicket between Hashim Amla and JP Duminy. The latter started in imperious form, hitting 5 boundaries (four cover drives and a square cut) by the time he had faced 13 balls. Some superb straight drives followed and it came as more than a surprise when he attempted to sweep Herath who held the ball back a fraction and was dismissed for top score of 63 (95 balls, 10 fours).

The only other batsman who looked like dominating the bowlers was Quinton de Kock but he has been on a different planet to most of the world's other batsmen this season.

It is always best to wait for both sides to bat before making a call but on the evidence of the amount of assistance available to the bowlers today one would imagine that a Protea total of around 350 would be more than competitive.