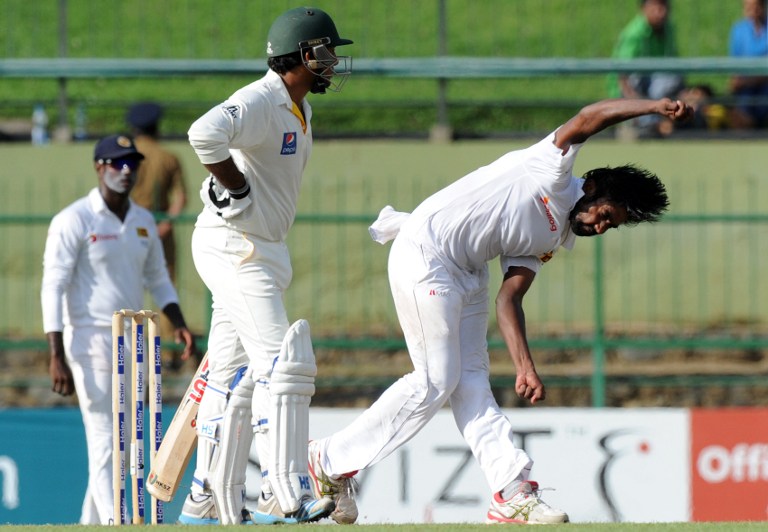 Pakistan leg-spinner Yasir Shah claimed his third five-wicket haul of the series but Sri Lanka took the upper hand on day two of the third and final Test by restricting the visitors to 209 for nine at Pallekele on Saturday.

After Azhar Ali (52) showed some fight in an otherwise top order capitulation, Sarfraz Ahmed remained not out after a gutsy 72 to take Pakistan past the 200-mark in the series-deciding contest.

Imran Khan was scoreless at the other end, having survived six balls with Pakistan still 69 runs behind Sri Lanka's first innings total of 278.

Intermittent rain allowed only 68 overs on the second day at the Pallekele International Cricket Stadium.

Resuming on 272 for eight, the hosts put on six runs before losing their last two wickets inside four overs. Shah (5-78) dismissed Nuwan Pradeep as Sri Lanka's last five wickets could only add 30 runs to the total.

Having claimed 22 victims in five innings, Shah will fancy his chances of surpassing Australia spin great Shane Warne's record haul of 26 wickets in a series by a visiting bowler in Sri Lanka.

His team, however, found themselves deep in trouble after losing three wickets in the morning session and could not really recover.

Dhammika Prasad (3-78) troubled the Pakistan openers with his lively pace and was rewarded when he trapped Shan Masood (13) leg before with a yorker.

Pradeep (3-26) tasted success with his third delivery when Ahmed Shehzad (21), caught in two minds, withdrew his bat but not before the ball kissed an edge en route to the wicketkeeper.

Younus Khan (three) made matters worse for the tourists when he set off on a suicide single and could not beat Kaushal Silva's direct throw from short midwicket.

Azhar battled on, as wickets tumbled at the other end, and brought up his 20th Test fifty before edging Pradeep to the slip.

Pakistan captain Misbah-ul-Haq (6), nursing a groin injury, came out to bat at number seven but did not last long, trapped leg before by a Pradeep delivery that angled in.

Sarfraz reached his fifty in 57 balls but Sri Lanka are well set to take a first innings lead which might prove crucial in what could be a low-scoring contest.