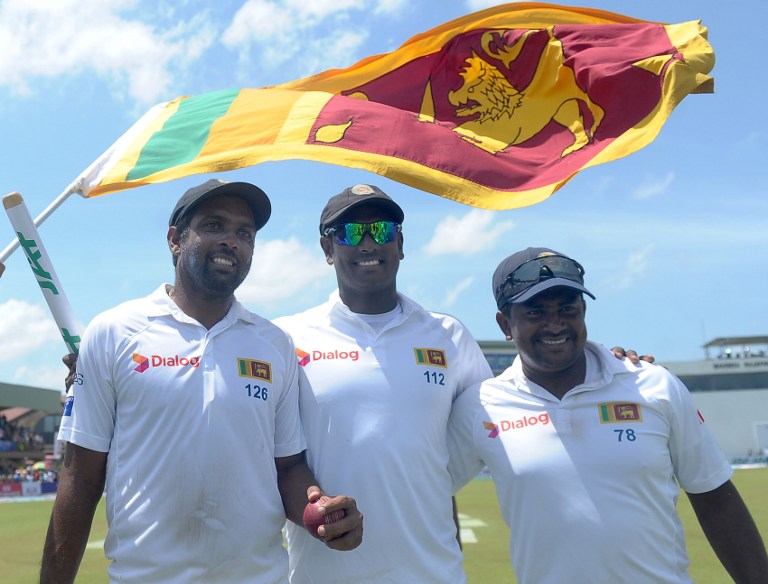 Sri Lanka captain Angelo Mathews had been under immense pressure after successive Test series defeats prior to Australia's tour of the island. © AFP

Before the Test series began, Australian coach Darren Lehmann made the usual flattering, almost patronising, comments that are becoming commonplace when a formidable team takes on one of the lower-ranked Test nations: 'They're better than they seem at home, we won't be taking them lightly, they have some great players'. A refrain that would no doubt irk Bangladesh fans and one Angelo Mathews's team would have been getting used to also.

Mathews was leading a team ranked seventh in Tests, and Australia flexed their muscles before ball-one of the series had even been bowled, after being presented with the Test championship mace on arrival in Colombo as the top-ranked side in the world. Sri Lanka had just been comprehensively demolished in both their Tests in England, with poor batting and hopelessly inept and lethargic fielding for a team once considered the fittest in Asia.

"They are a lot better side at home, and that's going to be a challenge for us, but at the end of the day we just worry about what we're doing," said Lehmann, a few days before the opening Test of the Warne-Muralitharan Trophy.

And despite the potentially patronising undertone of Lehmann's remarks, they really were worried about what they were doing. The Australians, concerned by their poor record in Asian conditions, took giant steps to address the issue, even sending A teams to India and flying their Test players to Sri Lanka over two weeks prior to the start of the series, as well as playing first-class matches as preparation.

On the first day of the opening Test in Sri Lanka's hill country, Mitchell Starc and Josh Hazelwood ripped through the Sri Lankan top order with raw pace, just as Mitchell Johnson and Ryan Harris had done at the same venue and during the Galle Test back in 2011. It was beginning to look like a familiar rout.

But, where Australia back then relied on the youth of Shaun Marsh (141) and the experience of Mike Hussey (142) to bat Sri Lanka out of the game, to the point where even wicket-keeping legend Kumar Sangakkara was called on to bowl, none of the Australians were able to master Rangana Herath this time around.

Veteran spinner Rangana Herath became only the second Sri Lankan to register a hat-trick in Test cricket during the second Test in Galle. © AFP

Herath and debutant chinaman Lakshan Sandakan ripped Australia out for 203 in Pallekele, and then took a seat in the pavilion to watch Kusal Mendis play the best innings of his short Test career, forcing the stunned Australians onto the back foot with a majestic 176.

When Sandakan and Herath repeated the dose in Australia's second innings, the miracle comeback was complete. Four days of hard work had paid off and the hosts had reaped the rewards of a 106-run win.

Australian chief selector Rod Marsh was stunned but was not at a loss for words, slamming the performance of his senior batsmen. He was left shaking his head at the lack of results in the subcontinent, following what seemed to be a mountain of effort in groundwork done to prepare.

"What else can we do really," he bemoaned. "We send them off to India, we send them to other parts of the world where the ball turns; we played an 'A' series in India last year and they batted well against good spin bowling…"

With the second Test in Galle headed for a turning track, tailor-made to suit Sri Lanka's spin threat Herath, and the Australian chairman of selectors too feeling disillusioned; one had the feeling some psychological damage had been done. Their incompetence against quality spin bowling was playing on the minds of the tourists.

Whatever the case may have been, it did not seem that the bowlers were mentally affected. Honours were even on day-one at Galle, as Sri Lanka were bowled out for a below par 281, before snaring the wicket of David Warner off the last ball of the day to leave Australia 54/2.

After an ordinary outing in Pallekele, Dilruwan Perera turned it on in Galle, becoming the first Sri Lankan to score a half-century and take 10 wickets in a Test match. © AFP

Yet, if the bowlers weren't suffering from mind games, the Australian batsmen seemed as though they certainly were, losing their last eight wickets for 52 runs: all victims of spin, most dismissed playing for extravagant turn against the straighter one.

Herath delivered crucial blows in the Australian second innings, recording the second hat-trick in Sri Lanka's Test history, while Sandakan was only needed for two balls. This time, Herath's partner in dismantling Australia was Dilruwan Perera with 4-29.

The match moved on at a brisk pace from there. Sri Lanka were all-out in their second innings as quickly as they had been in, scoring 237 at rapid pace. Perera again left his mark, top scoring with 64 and then taking two wickets to leave Australia in tatters at 25/3 on the second day.

Steve Smith's men started confidently on the third morning. However, the wickets of Warner and Smith — both to Perera — meant it was only a question of time before Sri Lanka wrapped up a win.

Riding the momentum from a second day in which he had the Midas touch, Perera was again simply unstoppable. He scalped 6-70, even castling the ever-reliable Adam Voges, as he played an ill-judged reverse sweep. Perera had a match-haul of 10-99, and going with his knocks of 16 and 64, the 34-year-old became the first Sri Lankan to claim 10 wickets and score a half-century in a Test.

In the end, it was fitting. What brought Sri Lanka victory was a superb piece of fielding, a department that had been their downfall in England. Australian wicketkeeper Nevill was run-out by Mendis after advancing down the track. Mendis had already claimed a spectacular bat-pad catch, and the other youngsters were not far behind, with Dimuth Karunaratne and Dhananjaya de Silva both taking superb diving catches at cover.

Nobody predicted this Sri Lankan side to defeat Australia, let alone win the series so dominantly. © AFP

The best side in the world — immaculately prepared and ready for battle — had been toppled by a team so fragile. For so long, cast as a side overly-reliant on now-retired stars, it seemed as though Sri Lanka would be searching for an eternity to gain even a semblance of respectability. A remarkable turnaround indeed.

So young and fresh was this team, not only had they lost in England but New Zealand hadn't been kind either, and Pakistan had shrugged them aside with ease, even on the dust-bowls of Sri Lanka.

Going into Pallekele, they had won just four of their last 14 Tests, including a less than convincing 2-0 win against the West Indies. Yet, before their detractors could blink an eye, they had beaten the number-one ranked team in the world. A nemesis they last defeated 17 years ago, way back when the great Muttiah Muralitharan and Sanath Jayasuriya were lighting up scoreboards.

Whilst there may be plenty to ponder for the Australians, and plenty to savour and celebrate for the Sri Lankan side, one thinks that Mathews, who was so distraught after the England loss, and seen raising his arms in triumph after the series win against Australia, may take a little while to reflect on just how far his young team have come.