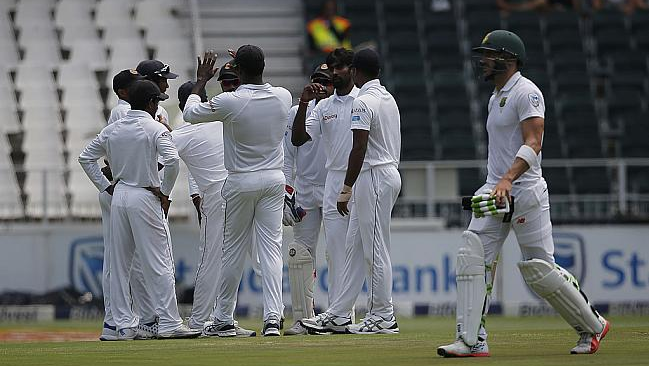 Nuwan Pradeep minimised the damage for the visitors with an exceptional spell. © AFP

Vernon Philander and Kagiso Rabada took two wickets apiece as South Africa tightened their grip on the second day of the third and final Sunfoil Test match against Sri Lanka at the Bidvest Wanderers Stadium on Friday.

When bad light caused an early close the visitors had reached 80/4 in their first innings in reply to the Proteas total of 426 all out, which appears to be a well above par total.

Just how much the 292-run partnership between Hashim Amla and JP Duminy means to the home side became evident throughout the second day as the Proteas lost five wickets for just 60 in the morning session, as the playing surface appeared to be becoming increasingly venomous, more than justifying Faf du Plessis' decision to bat first.

Du Plessis himself was hit numerous times on the body during his brief innings and he, Amla and Philander all fell to deliveries from Nuwan Pradeep that bordered on the unplayable. In all, 11 wickets fell on the second day.

If one excludes the stand between Amla and Duminy there has been no partnership in the match to reach 50, which shows just how difficult batting has been. Sri Lanka have had only three partnerships of 50 or more in the series to date, and it is unlikely that this statistic is going to show much improvement over the remainder of the series.

Philander and Rabada have now taken 31 wickets between them in the series to date at averages that are in the low teens. They were well supported by the recalled Wayne Parnell and new cap Duanne Olivier, although neither of the latter two managed to take a wicket.

Sri Lanka at least won the morning session when Pradeep put in a superb spell to take four wickets for a single run. But the damage done by Amla and Duminy meant that they were still going to be well behind in the overall match situation.

Pradeep finished with figures of 4-78, and would have had a fifer but for another dropped catch, while the deserving Lahiru Kumara (4-107) also picked a four-wicket haul and now has 11 wickets from his two appearances in the series.