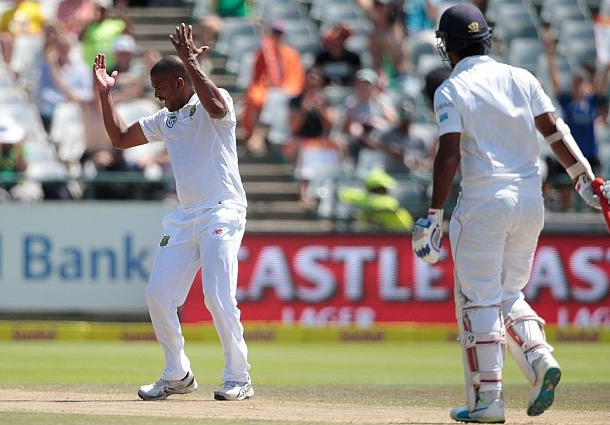 Sri Lanka are battling to save the series, with defeat in the second Test around the corner. © AFP

Sri Lanka finished the third day of the second Test against South Africa in Cape Town in a precarious position at 130/4, chasing a mammoth 507 to win, but had at least done well enough to ensure that the game was not over embarrassingly early.

Also encouraging was the fact that two of their best batsmen Angelo Mathews and Dinesh Chandimal, captain and vice-captain respectively, were still at the crease as they chase 377 more for an unlikely win. The pair had added an unbroken 61-run stand after Sri Lanka had fallen to 69/4.

It looked like it would be another humiliating and early finish to the Test for Sri Lanka when Kusal Mendis followed Dimuth Karunaratne to the pavilion to leave the visitors at 25/2. Karunaratne was bowled by Philander for six off an inside edge and he had Mendis caught behind off a simple chance to Dean Elgar in the slips.

Batting up the order, Dhananjaya de Silva continued to impress, scoring a boundary-rich 22 and striking two fours and a six. Kaushal Silva appeared to struggle, but nonetheless hung in at the crease, adding 41 with de Silva and scoring 29 from 70 balls.

Against a dominant attack that has excelled all year, there were some nervy moments for the pair. In what may be one of his final days of international cricket, Kyle Abbott was particularly impressive and almost had de Silva bowled off a very tight leave when he was on six. Abbott has signed a Kolpak deal with Hampshire and, as a result, he may not be able to represent South Africa following this tour, despite his excellent form.

The entertaining de Silva responded by lofting Keshav Maharaj over his head for six, but Abbott again came back strongly, having opening bat Silva close to chopping onto his stumps. Maharaj was bold, flighting the ball up to de Silva despite his confidence against slow bowling.

Shortly after de Silva had struck Maharaj for a four, Kagiso Rabada dismissed Silva with a terrific bouncer that managed to claim the side of the glove on its way through to Stephen Cook at bat-pad. Sri Lanka were 66/3, and unfortunately, yet again, de Silva was unable to capitalise on an excellent start, falling just three runs later.

The replay showed that the ball was missing the leg stump by a significant margin, but de Silva had declined the review and was on his way. Had he remained at the crease, Sri Lanka would have given themselves a huge chance to bat out the remainder of tomorrow.

But, as it was, Sri Lanka did improve to an extent, with Mathews again allowing his attacking instincts to flourish, especially against Maharaj, who would no doubt have brought some relief in contrast to the fiery pace of Rabada and Abbott.

Chandimal slowly started to find his rhythm. Like de Silva, Mendis and Silva, he had been guilty of throwing away some excellent starts on this tour, often to soft dismissals. Both of the batsmen continued to add to a tough day in the field for Maharaj, who finished with 0-40 and an economy rate of four runs an over. Mathews ended the day on 29, while Chandimal was on 28.

Earlier in the day, Suranga Lakmal had again impressed taking 4-69 in South Africa's innings of 234/7 declared. Regular wickets and excellent bowling by Lakmal kept South Africa's run-rate in check yet they took an aggressive approach in search of quick runs.

Amla continued his poor run, falling for a fifth-ball duck to Lakmal. The run-out king of international cricket Temba Bavuma was, ironically enough, run out, also for a duck. The standout for the Proteas was their skipper Faf du Plessis, who scored a rapid-fire 41 from just 49 balls.

Sri Lanka are a long way from their improbable victory target of 507, but they will at least hope that Chandimal and Mathews can hang around for a long period in order to survive day four and see the game to a fifth and final day.