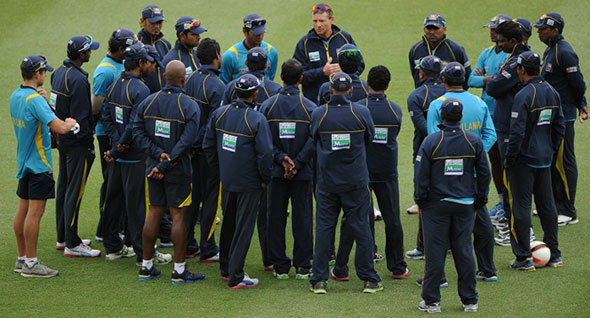 Their embarrassing performance in the two-nil series loss to Australia has left the visiting Sri Lankans battered and bruised, but coach Graham Ford says Sri Lanka are "very determined to bounce back" in the dead-rubber third and final Test on Thursday in Sydney.

Sri Lanka preferred to take the day off on Tuesday instead of practising, and spent their afternoon at a function attended by Australian prime minister Julia Gillard and the Australian team at the Kirribilli House, the official Sydney residence of the PM.

"We actually had a really good training session yesterday," Ford said, defending the team’s decision to skip practise a day before the third Test.

"We changed our arrangements a little bit and came through early yesterday and got a really good session in.

"With the amount of cricket that we’ve been playing, it was just felt that to have three solid days in a row would be a little bit too much.

"We’d rather make sure the practices are high quality. So a bit of time out today and we’ll get stuck in tomorrow.

"I think the guys have hurt pretty badly after the last performance, and are very determined to bounce back and do something special in this Test."

The Test will be a poignant affair, with the match set to be in honour of Tony Greig who passed away recently, as well as being Mike Hussey’s final Test.

It will also be the last Test for Mahela Jayawardene as Sri Lanka’s captain, while for many seniors in the Sri Lankan side it will be their final Test appearance on Australian soil.

But the tour ended for Sri Lanka’s best batsman Kumar Sangakkara at the Melbourne Cricket Ground on the third day of the second Test, after he too joined Sri Lanka’s long injury list, when Mitchell Johnson broke bones in Sangakkara’s right hand with a short-ball.

Wicket-keeper Prasanna Jayawardene was today ruled out, as his broken thumb had not healed as expected. He too is a victim of a vicious Johnson thunderbolt.

Sri Lanka have also lost the service of left-arm seamer Chanaka Welegedara, who suffered a hamstring injury, while Nuwan Kulasekara looks unlikely to play as well because of a blow to his ribs during a practise session.

Shaminda Eranga, who injured his leg playing football at a practise session earlier today, is the visitors’ newest casualty. It is unclear if Eranga will be fit in time for Sydney.

Dinesh Chandimal, an exciting prospect with the bat, is now almost certain to make it into the final XI along with Lahiru Thirimanne.

Adding to their woes, several players are also feeling under the weather, "with a bit of throat infection and flu symptoms," according to Ford.

The third Test begins at the Sydney Cricket Ground on January 3.