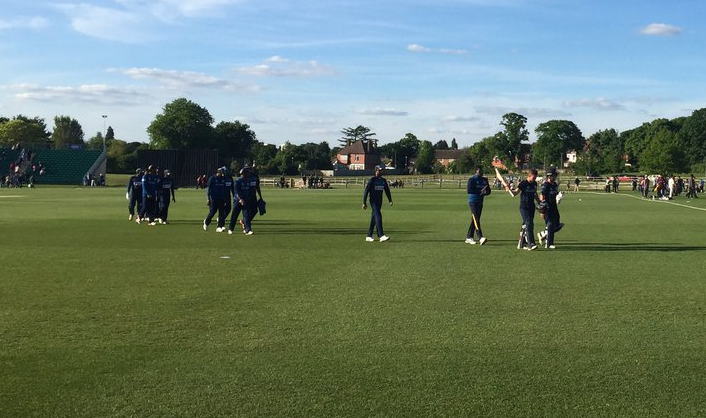 Scotland chased down a challenging total with ease. © Cricket Scotland

Scotland defeated Sri Lanka by seven wickets today at the Kent County Cricket Ground in the first match of the two-match series organised to prepare Sri Lanka for English conditions ahead of June's Champions Trophy.

Angelo Mathews's men posted 287 all out in 49.5 overs after winning the toss and batting first but Scotland made light work of that total, losing just three wickets in their astonishing run chase.

Sri Lanka's bowlers were put to the sword, as their opponents chased down a challenging target with almost 10 overs to spare and plenty of wickets in hand.

Dinesh Chandimal top-scored for Sri Lanka with a 105-ball 79, while Chamara Kapugedera (71) and Kusal Perera (57) also contributed with half-centuries.

Alasdair Evans (3/62) and Stuart Whittingham (3/56) were the top wicket-takers for Scotland and they were also aided by miserly spells by spinners Mark Watt and Con de Lange.

Scotland openers Matthew Cross (106 not out) and Kyle Coetzer (118) top-scored, putting on a double-century stand in their reply.

"It's a massive step forward for Scottish cricket," Cross said of the victory, speaking to BBC Scotland. "It was a convincing victory against a side with plenty of Test match experience. We dominated and ran out comfortable winners."

Sri Lanka's bowling attack failed to threaten their opposition, as Scotland reached the target in the 43rd over with seven wickets in hand.

The second and final match between the two sides takes place at the same venue on May 23.