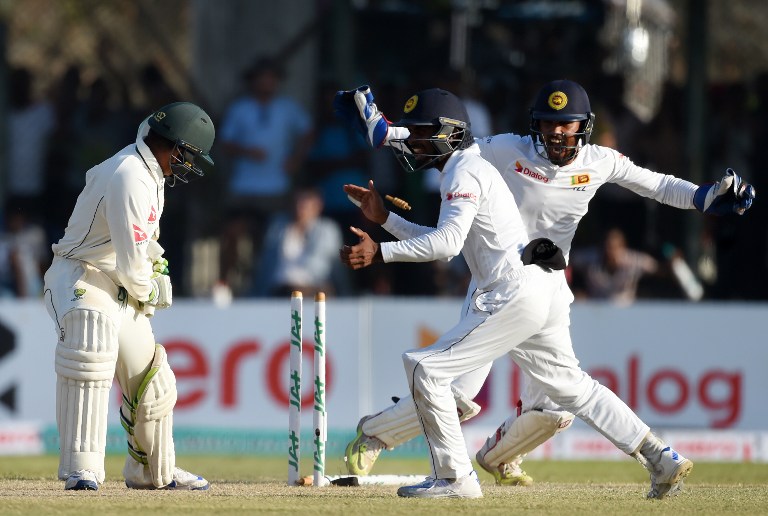 Usman Khawaja's off-stump was uprooted by Dilruwan Perera to send the left-hander back for a first ball duck. ® AFP

Dilruwan Perera starred on day two of the second Test against Australia in Galle, taking four wickets in the visitors' first innings, and then top scoring in Sri Lanka's second dig with 64 and claiming 2-9 to leave Australia 25/3 at stumps, needing a further 388 runs for victory.

But the headlines will no doubt belong to Rangana Herath, who claimed the second hat-trick in Sri Lankan Test history, as Australia collapsed from 59/2 to 80/7 in their first innings. Herath also scored 26 and took 1-16 late in the day to cap off a stellar effort.

Australia started the day at 54/2, after Sri Lanka had claimed the wicket of David Warner off the last ball of the first day's play, and things looked relatively calm for Usman Khawaja and Steve Smith, but both were bowled by Perera and Herath respectively to leave Australia in a spot of bother at 59/4.

Adam Voges and Mitchell Marsh arrested the slide with a 21-run stand for the fifth wicket, but Voges was the first wicket of Herath's hat-trick, and there began a collapse that Australia was unable to recover from at any point during the day.

The veteran Western Australian was brilliantly caught by Dimuth Karunaratne at a diving cover, before wicket-keeper Peter Nevill fell LBW to Herath.

The next ball, Mitchell Starc was hit on the pads and Angelo Mathews, with an unusual mix of optimism and reluctance, opted for the review on an LBW decision that seemed to have the ball passing over the top of the stumps.

But the ball was just clipping the top of the leg stump, and the Sri Lankan fieldsmen went wild in congratulating Herath on just the second hat-trick in Sri Lanka's Test match history.

All of a sudden, Australia were seven down for 80 and slipped further to 85/8 when Nathan Lyon was caught by Kusal Mendis at bat-pad. Some lusty blows from the under fire Marsh ensured Australia finished with 106.

After a poor outing at Pallekele, Dilruwan Perera impressed with his off spin and combined with Rangana Herath to make life tough for the visitors. © AFP

That score didn't look too bad after both of Sri Lanka's openers failed again and the hosts went to lunch at 30/3, but Mathews and Kusal Perera steadied the ship with a 48-run stand for the fourth wicket.

Kusal Perera (35 off 38) and Mathews chose attack as the best form of defence, with Kusal Perera following on from a knock of 49 in the first innings and Mathews (47) batting with calm, having scored 54 the previous day.

By far the brightest star for the tourists was Starc, who took 6-50 in Sri Lanka's second innings to claim a match-haul of 11-94, an incredible effort on a spinner's wicket.

Needing to survive a testy six overs before the close of play, the opening stand again disappointed, with Joe Burns falling off the second ball of the innings for the second time in the match — this time caught by de Silva at cover off the bowling of Herath.

Nightwatchman Lyon was then caught brilliantly at bat-pad by Silva before Khawaja inexplicably left his first ball and was bowled for the second time in the Test, as Dilruwan Perera snared two late wickets.

Australia will no doubt be looking to make things difficult for Sri Lanka on day three, but the hosts are perfectly poised to claim a historic series win before heading to the SSC next week.