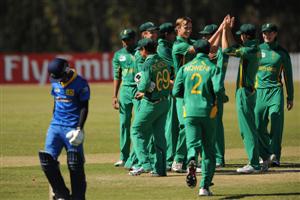 Sri Lanka and Zimbabwe to play in plate championship
By Staff Writers | August 16, 2012

All Test-playing nations, with the exception of Sri Lanka and Zimbabwe, have progressed to the super league quarter-final stage of the ICC U19 World Cup currently being played in Australia.

Sri Lanka and Zimbabwe along with Afghanistan, Ireland, Namibia, Nepal, PNG and Scotland now will regroup in Brisbane and will compete in the plate championship, which will start from Sunday (19).

The super league quarter-finals will also be played on August 19 and 20 in Townsville.

Sri Lanka’s chances of qualifying for the quarter-final was ruled out after Bangladesh closed the door for their Asian rival with a comfortable seven-wicket victory over Namibia at Peter Burge Oval in Brisbane.

Sri Lanka will play Nepal on August 20 in Brisbane in their plate championship clash.