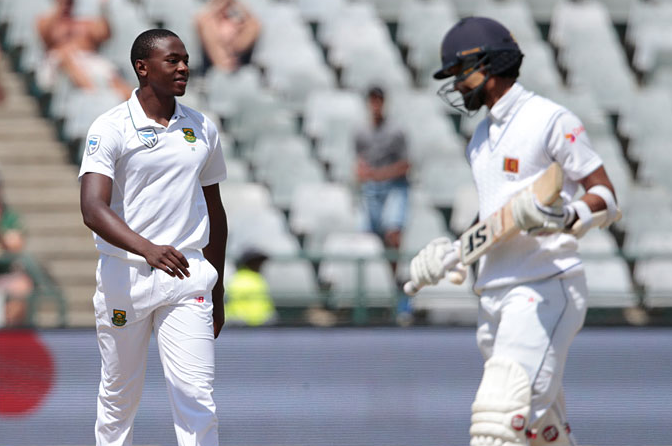 Kagiso Rabada picked up the Man of the Match award for his 10-wicket match haul. © AFP

Starting the day at 130/4, Sri Lanka did not even last until the lunch break before being bowled out and granting South Africa a resounding series win. Kagiso Rabada was the destroyer for South Africa, with a match haul of 10-92.

Sri Lanka's survival on day four hinged on the success of Angelo Mathews and Dinesh Chandimal, captain and vice captain of the side respectively. Mathews began the day with a couple of crisp drives but once again had trouble with the bounce of Rabada and Vernon Philander, as the pair of pacemen regularly squared him up on the off-side.

However, it was Chandimal who fell first, caught chipping Rabada to Stephen Cook at short-leg.

Being the last recognised batting pair, Upul Tharanga joined Mathews and was not afraid to showcase some flashy strokeplay, but, as has been the case with many of the Sri Lankan batsmen throughout this tour, he overdid it and played one shot too many. After striking 12, all in boundaries, he was caught behind off Rabada going for another booming drive. Sri Lanka's hopes of saving the match were obviously all but gone, but Tharanga would be chastising himself for at least not hanging around with Mathews to last until the lunch interval.

Rangana Herath was more determined to give the crowd some value for money and hung around for more than an hour. Mathews continued to attack, and thus, found himself edging Rabada behind to de Kock as he looked to drive off the back foot. He narrowly missed out on a 27th Test half-century, falling for 49, but it would have been nothing more than a personal milestone at this stage in the game.

Mathews was the third wicket of the morning for Rabada and his fifth of the innings. Keeping an immaculate line and length, and getting just enough movement to trouble the lower order, he had proved unplayable. It will be of real encouragement to South Africa's players, fans and  administrators alike that, at only 21, there is possibly even more improvement to come.

But for now, even to be considered one of the most dangerous bowlers in the world barely two decades into his life is a serious boon for the young superstar. Man of the Match Rabada's 10-wicket haul in this match was the second of his career already, having taken 13-144 at Centurion during the fourth Test against England in January 2016.

Suranga Lakmal added 12 with Herath, of which the former scored 10. He started with a wonderfully struck straight drive off Kyle Abbott but was lucky to dig out a yorker re-attempting the same shot on the following ball. He then leg-glanced Rabada for four, with a paranoid Cook (who had been doing his best to duck and dive balls all day) hurriedly getting himself out of the road.

Just five balls later though, Rabada had Lakmal caught behind. With the score at 178/8, and just Lahiru Kumara and Nuwan Pradeep to come, Herath decided it was time to add some semblance of respectability to the score by playing some shots. Kumara was out in the first innings after leaving a straight ball that cannoned into the stumps, so one can easily understand Herath's search for quick runs.

Herath nonetheless showed a bit too much trust in Kumara, leaving him two balls to face against Keshav Maharaj. He couldn't resist the temptation to go after the spinner and was stumped for nine, walking way out of his crease in search for a massive six. He had earlier struck Maharaj for a couple of boundaries, but it seemed inevitable that at some point the wily spinner would eventually outsmart him.

Sri Lanka's senior spinner was in this case playing the role of senior batsman as well. He left Pradeep only one delivery to survive against Philander, but he couldn't do so, and was clean bowled going for a booming drive down the ground. The sight of stumps flying all over the place signalled a huge 282-run win for the host team.

With a faster, bouncier pitch awaiting them in Johannesburg's Wanderers Stadium, Sri Lanka have a huge challenge on their hands coming into the final Test of the series.