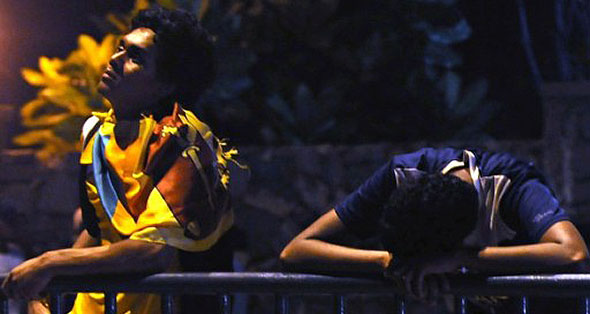 Government ministers blame lack of team spirit, player agents and coach for Sri Lanka’s downward spiral, while absolving themselves of any responsibility
By Hilal Suhaib | January 12, 2012

Sri Lanka’s media minister and spokesman for the government Keheliya Rambukwella said that he was "appalled" and "horrified" at the team’s performance in South Africa, after Sri Lanka suffered a humiliating 258-run defeat in the first ODI at Paarl on Wednesday.

Sri Lanka were bowled out for 43 runs, their lowest ever ODI total, in response to South Africa’s 301/8.

"You can understand a defeat, but not something like this," Rabukwella said, responding to a query from a journalist during a weekly cabinet briefing.

"We are appalled. Something has to be done immediately. It looks like there is no team spirit among players."

Rabukwella is not the first government minister to publicly criticise the performance of the national cricket team. Earlier this week, sports minister Mahindananda Aluthgamage slammed the team and accused the players of being driven by "internal politics".

"The Sri Lanka cricket team is in a crisis situation. It is very unfortunate," Aluthgamage told journalist on Monday.

"The team is not clicking together off the field and it has shown in the results on the field."

"Once the team returns, I plan to meet them," he added.

"I feel there is a lot of internal politics within the team that is spilling over to the cricket pitch."

Last month, Aluthgamage told parliament that there was a lack of communication between the captain and the coach.

"At this moment, senior players stated that there’s a communication gap between the captain and the main coach," Aluthgamage said.

"This is the true story. This is the politics within sports," he added.

Aluthgamage then went on to blame the commercialisation of the sport and the players’ agents for the cricket team’s woes.

"[Commercialisation] has become a cancer to the entire game of cricket," he said.

However, critics argue that government interference in cricket administration is the reason for the current financial crisis and the performance of the team.

When the previous cricket administration – the government-appointed interim committee headed by DS de Silva and Nishantha Ranatunga – was finally dissolved amid allegations of mismanagement and corruption, the island’s cricket board was left in $69 million in debt. The financial crisis was blamed on budget overruns during the ICC Cricket World Cup 2011 due to the construction of new stadiums, including the stadium named after the Sri Lankan president Mahinda Rajapaksa in his home-town of Hambantota.

Due to the lack of funds, all stadiums owned by Sri Lanka Cricket (SLC) are now maintained by the island’s armed forces.

"[SLC] was not just coerced but forced by Mahinda Rajapaksa to build the stadium at [Hambantota]," the Sunday Leader claimed in an exposé last year.

"SLC had budgeted one billion rupees as their share for [the stadium in Hambantota] (though it was going to cost much more), Rs. 1.3 billion for Kettarama and Rs 900 million for Pallekele. That [SLC] is now left to cough out the entire cost for [Hambantota] is one of the reasons for the financial crunch," the report went on to state.

According to the Federation of International Cricketers’ Associations, Sri Lanka’s players have not been paid since March 2011. SLC owes the players in excess of $6 million, which critics say is one of the primary reasons for the recent decline.

"If what the sports minister says is true, isn’t it a fact that he too is being influenced by these player agents? For it is the teams (influenced by player agents) that he eventually puts his signature on and approves," Sa’adi Thawfeeq wrote on his column in The Nation recently, after the sports minister blamed players’ agents and managers for influencing selection.

"If the sports minister is of the opinion that player agents have had an influence over selections, then he should be thankful to them in some way as Sri Lanka, until the 2011 World Cup, had a very good run in Test, ODI and T20I cricket. Players have been having agents since 2002."

Such comments from Aluthgamage, Thawfeeq wrote, "is like trying to shift the blame of the financial mess [SLC] is currently undergoing on to the players".

In an attempt to root out government interference in member boards, the ICC announced a change to its constitution. It required all member nations to carry out elections. Sri Lanka dissolved its government-appointed interim committee and abided by the ICC ruling. The secretary of the interim committee during the World Cup Ranatunga and the head of the last interim committee Upali Dharmadasa – both said to be backed by the government – were elected uncontested.

It is alleged that days before the controversial election, the director general of sports Ranjani Jayakody had changed the list of eligible voters, replacing them with government ministers as delegates to vote.

"This was done to ensure that all the clubs that came within the said ministers’ electorates or districts would tow the political line," former Sri Lankan captain Hashan Tillakaratne alleged in a letter to the ICC this week, requesting them to investigate the election.

Shortly after the election, the government-run Sunday Observer carried an interview with Jayakody in which she claimed that "legitimate requests" by voting clubs had forced her to change delegates.

"There were last minute legitimate requests by certain member clubs to change their representatives," she said.

"For example, a club from Galle informed me that the vehicle in which their representatives had been travelling had met with an accident. There were a few other genuine requests."

In addition, candidate for vice-presidency Mohan de Silva, who pulled out of the election in protest, told reporters last week that "according to clause number 18 [in the cricket board’s constitution], the candidates for a cricket board election should be those who have played cricket at a major level."

"This clause too has been violated," de Silva said.

"It is very difficult to find good cricketers. We have to correct our domestic structure. Coming from our club cricket to international cricket is a huge difference," Dilshan told journalist in South Africa, after the Test series defeat against the hosts.

Since May 2011, Sri Lanka have lost all four of the Test series they have featured in and suffered consecutive ODI series defeats against England, Australia and Pakistan. South Africa leads the on-going five-match ODI series 1-0. The second ODI will take place at East London on January 14.