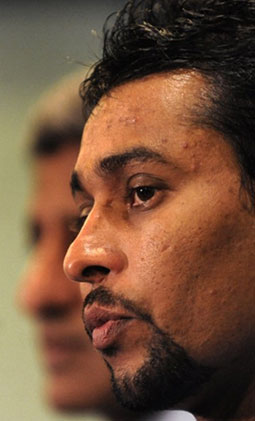 Sri Lanka’s selectors turned down Kumar Sangakkara’s offer to remain as Test captain for this year’s Test series against England and Australia, and appointed Tillakaratne Dilshan on April 18 as Sri Lanka’s captain for all three formats, after Sangakkara stepped down as captain after the ICC Cricket World Cup 2011 tournament.

The selectors have included Dinesh Chandimal, Lahiru Thirimanne, Nuwan Pradeep and Thisara Perera, along with three spinners for a three-Test tour of England in spring, where conditions are expected to favour the seamers.

Angelo Mathews and Lasith Malinga have been left out due to injury, while the latter, at the time, requested time off from Test cricket due to an injured right knee.

Nishantha Ranatunga, secretary of Sri Lanka Cricket (SLC) interim committee told reporters on April 20 that SLC had not specified a return date of May 20, when it issued Sri Lankan players with No Objection Certificates for the Indian Premier League (IPL).

In comments made on an Indian news broadcast, Muttiah Muralitharan claimed that the players and the franchises were cleared to remain in India until May 20.

“That is the reason why we have decided to write to Malinga and ask him to return home and undergo a rehabilitation programme. Malinga has specifically mentioned in a letter that he is not available for Test matches right now because he has a nagging knee problem,” Mendis told reporters on April 20 in Colombo.

"When the player says that he is injured and he has to undergo a rehab programme, what we can do is to tell him to undergo it immediately without continuing to play cricket in the IPL, and then get ready for cricket in Sri Lanka if he is interested in playing for his country,” he added.

After SLC denied the Indian cricket board’s (BCCI’s) request to allow Sri Lankan players to remain in the IPL until May 20, the Times of India quoted an unnamed BCCI official who claimed that the BCCI would block the payments of the Sri Lankans “if they leave without honouring their commitments”.

“If the players are indeed called back by May 5, the BCCI is likely to retaliate hard. It may ask the IPL franchisees to block the salaries of the Lankan cricketers and even refuse to pay the Lankan board [SLC] its share of 10% of the players’ earnings,” the Times of India reported on April 21.

Sri Lanka’s sports minister Mahindananda Aluthgamage has backtracked from his previous stance, and said that he will allow the Sri Lankan players to remain in India until May 18.

Malinga to give up Test cricket 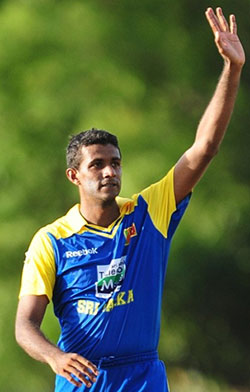 Just days after chief selector Duleep Mendis called into question Lasith Malinga’s ethics, claiming that it was “awkward” for Malinga to play Twenty20 cricket at the IPL but not Test cricket for Sri Lanka, the 27-year-old fast bowler announced in a statement from India on April 22 that he is likely to retire from Test cricket shortly due to his injury-prone right knee.

Farveez Maharoof smashed 102 off 134 balls for Lancashire in his debut for the English county, becoming only the third Lancashire player to score a century on debut.

Mahela Jayawardene said that he agreed with Lasith Malinga’s decision to quit Test cricket in order to prolong his career.

“I know when I was the captain we used to try and calculate his work load and used him accordingly. At times it used to flare up and once he was away from cricket for 16 months,” Jayawardene told reporters in India on April 23.

“In order to extend his career he has to quit test cricket. In fact his target is next world cup in 2015 and by bidding adieu to tests he has prolonged his career in shorter version of the game.

“He had worked hard and made a fine comeback and is performing brilliantly. He has realised that he can’t sustain that huge work load and perhaps has prolonged his career. I am very happy for him,” Jayawardene added.