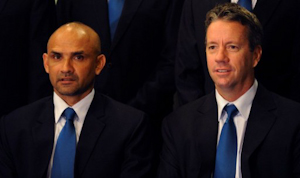 The financially struggling Sri Lanka Cricket (SLC) has handed their batting coach Marvan Atapattu the role of assistant coach after failing for nearly two years to fill the vacancy.

After serving as assistant coach under Trevor Bayliss since November 2009, Sri Lanka’s last full-time assistant coach Stuart Law later took over from Bayliss as interim-head coach in April 2011, but abandoned Sri Lanka mid-way through a tour of England and Scotland less than two months later to join Bangladesh as their head coach.

The construction of stadiums for the ICC Cricket World Cup in 2011 left the island’s cricket board in deep trouble and in millions of dollars in debt, which resulted in a dire situation for Sri Lankan cricket, including contracted players going unpaid for months.

The inability to afford an overseas assistant coach, as was the norm for many years prior to 2011, is yet another setback in a series of setbacks as a result of ill-conceived decisions made by the then government-appointed interim-committee headed by Somachandra de Silva and Nishantha Ranatunga.

Ranatunga is the current secretary of SLC, and was elected uncontested in an election that critics claim was rigged.

Atapattu, 42, is a former captain and was one of Sri Lanka’s finest opening batsmen to have played the game.

The 39-year-old Vaas is widely thought of as the best fast bowler Sri Lanka has produced, and was recruited by New Zealand to assist their fast bowlers on their tour of Sri Lanka last year, which paved the way for the former fast bowler to be considered for a coaching role.

The cricket board’s website makes no mention of the recent changes, and the board is yet to officially announce them, although an SLC official has reportedly made statements to media outlets confirming the appointments.