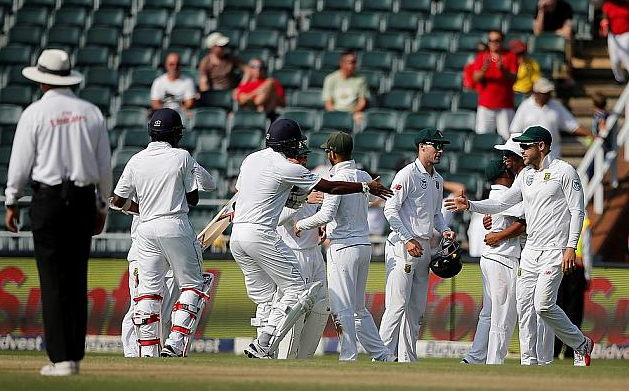 Sri Lanka were comprehensively defeated in all three matches of the Test series. © AFP

Three innings. Three days. Three-nil. Sri Lankan and South African fans longed desperately for an improved performance from the Asian touring side, but in the third and final Test in Johannesburg they put in their worst performance. The visitors lost 16 wickets on day three to collapse to an innings and 118-run defeat.

Resuming on day three at 80/4 in their first innings, they quickly lost control. Vernon Philander removed Chandimal, who was poking away at a delivery outside off stump. It was a simple take in the end for Quinton de Kock and it was 90/5 for Sri Lanka. When he had Angelo Mathews caught at 100/6, it was far from a simple take. Diving away to his right, de Kock was at a full-length stretch and was almost beyond first slip by the time it entered his glove. As it popped out, he used his other hand to keep it in and stable, and Mathews was on his way.

Rangana Herath became seamer Duanne Olivier's first Test wicket when he skied a simple catch to Stephen Cook, much to the delight of the elated debutant. Upul Tharanga demonstrated the staying power he had shown in the second Test with a polished 24, but he was Olivier's second victim after he pushed a simple edge to Dean Elgar. He was second-last out, with the score on 126, and they could only muster a mere 131 in total.

In reply, following on in their second innings, once again the Sri Lankans got off to the worst possible start. After Dimuth Karunaratne had fallen for a duck in the first innings, Kaushal Silva was out cheaply this time, caught behind off a rising, spitting, nasty bouncer from Kagiso Rabada that he managed the faintest of glove touches on. It was another great, last-minute take from de Kock, and Silva was given his marching orders first ball.

Kusal Mendis (24) looked good again, but every delivery seemed to be as lethal in its wicket-taking capacity as the last. He was bowled off an inside edge by Wayne Parnell after another good start, and 39/2 became 59/3, when Dhananjaya de Silva was caught by Faf du Plessis off Olivier. South African skipper du Plessis did not stop there, claiming his opposite number Mathews with one of the best catches you'll ever see, diving at full stretch in the air and snaring Mathews one-handed.

Dinesh Chandimal continued his poor run, falling for just 10, while Karunaratne did well to top score with 50. He was bowled by Rabada soon after reaching the milestone. The score now read 108/6 and only one result was possible.

Herath (10) and Suranga Lakmal (27) hung around to have some fun with Tharanga, who again made a good start before falling for 26. From there, Sri Lanka's last three wickets fell with the score on 177 as South Africa romped to a massive innings win. Parnell was the best of the bowlers in the Sri Lankan second innings, taking 4-51 on his return to the long form of the game as replacement for Kyle Abbott.

Another embarrassing away defeat for Sri Lanka and more dominance for a rampant South Africa, who will soon travel to New Zealand for a full tour. Sri Lanka, meanwhile, will sit and reflect, no doubt soul-searching before the limited-overs series begins.