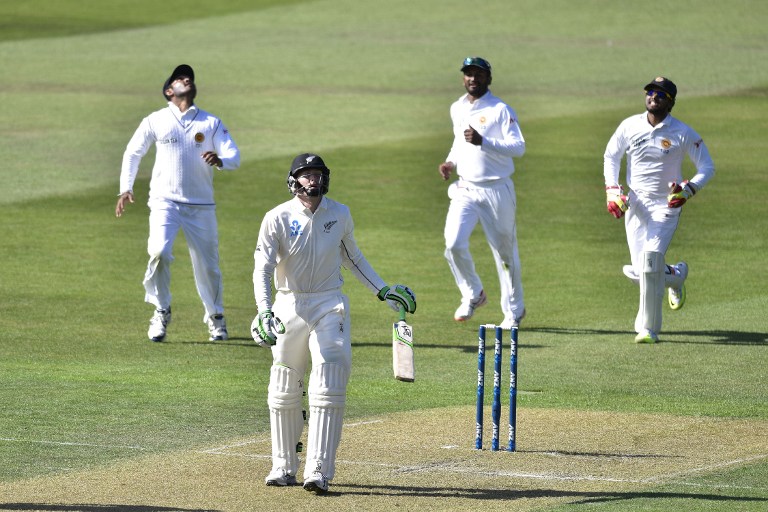 Martin Guptill was dismissed close to the end of the day's play but not before he plundered 156 on a track that was expected to help the bowlers. © AFP

Despite being sent in to bat on the opening day of their home series against Sri Lanka, New Zealand were largely untroubled, maintaining a run-rate of over four and dealing in boundaries on a regular basis, finishing the day at 409/8.

The New Zealand innings was anchored by Martin Guptill, who scored 156, and he received able support from his captain Brendon McCullum, who certainly gave the Dunedin crowd something to cheer about with a swashbuckling 75.

The pick of the bowlers for the visitors were Rangana Herath, who got through 19 overs and was the only bowler who conceded under three runs an over, and Dusmantha Chameera, who took 2/94 and consistently troubled the batsmen with his pace and aggression.

Late wickets, including six in the final session of play, meant that there was some degree of damage limitation for Sri Lanka.

Wicket-keepr BJ Watling and Mitchell Santner both fell victim to Chameera, who at last had something to show for a sustained display of fiery pace, before Angelo Mathews removed Guptill with an excellent delivery, feathered on the way through to Dinesh Chandimal behind the stumps.

Earlier in the day, Ross Taylor was removed for 8 shortly after tea but it was New Zealand's captain McCullum who took the aggressor's role, striking a typically belligerent 75 from only 57 balls, including 13 fours and one massive six that sailed over the cover boundary.

McCullum chanced his arm initially, riding his luck until he had his eye in, and then truly got stuck into a flagging and tired Sri Lankan attack that had struggled all day. With the introduction of part time spinner and partnership breaker Milinda Siriwardana, McCullum finally struck one too many and found the waiting hands of Kithuruwan Vithanage at deep square-leg.

In the post lunch session, Guptill and Kane Williamson carried New Zealand's high scoring rate with ease. The only bowler to cause mild discomfort for the hosts was Chameera, who troubled Williamson in particular with genuine pace and bounce with the short delivery.

Otherwise, the pair continued to bat on, unhurried and becalmed, as Guptill reached his third Test century, his first long-form ton for New Zealand in four years.

Rangana Herath was unable to find much assistance from the wicket, but still kept the Kiwis' scoring rate in check by bowling it slowly through the air.

Test debutant and middle order batsman Udara Jayasundera even came on to bowl some innocuous off-spinners in an attempt to end the union between Williamson and Guptill, but in the end it was a short delivery from Nuwan Pradeep that broke the back of the 173-run stand. Kane Williamson edged to Dimuth Karunaratne in the slip cordon on the stroke of tea to leave New Zealand at 229/2 at the break.

Sri Lanka had started the day poorly, conceding 114 runs in the opening session of the Test on a wicket offering enough movement to make it interesting for the bowlers. Suranga Lakmal and Pradeep bowled with a scrambled seam and were unable to capitalise on the conditions available, as New Zealand's openers Tom Latham and Guptill scored at over five runs an over with some crisp front foot driving.

Sri Lanka's captain Mathews took it upon himself and brought the run rate down to three an over. The pressure told as Latham once again gave his wicket away, falling for 22 after making a solid start. After he struck a boundary off his pads, he spooned a catch right between the legs of Lakmal at 56/1.

Aside from a few nervous moments against Mathews's accurate medium pacers, Guptill hardly looked troubled and made his way to a calm 50, while Kane Williamson carried on from the earlier form he had shown in Australia, scoring close to a run-a-ball before the lunch interval.