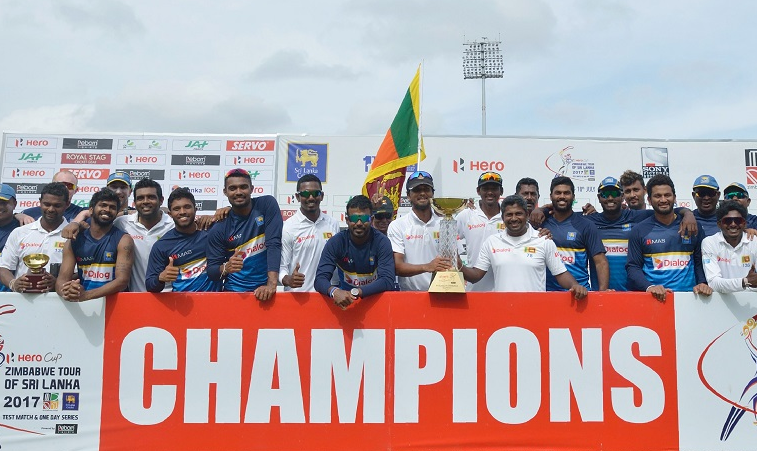 The win was a boost for new Test captain Dinesh Chandimal and eased Sri Lanka's pain after a shock defeat in the one-day series against Zimbabwe. © AFP

Fighting half-centuries by Niroshan Dickwella and Asela Gunaratne sparked Sri Lanka to a record 388 target to beat Zimbabwe by four wickets Tuesday in a pulsating end to the one-off Test.

A crucial 121-run sixth-wicket stand between Gunaratne (80 not out) and Dickwella (81) secured Sri Lanka's best-ever run chase in Colombo.

Sri Lanka's previous best was against South Africa in 2006, when they achieved a 352-run target. The fourth innings total against Zimbabwe was also the highest in Asia and fifth highest in Tests.

The win was a boost for new Test captain Dinesh Chandimal and eased Sri Lanka's pain after a shock defeat in the one-day series against the minnows.

Zimbabwe skipper Graeme Cremer claimed four wickets with his leg-spin to return overall figures of 9-275 at the R. Premadasa Stadium.

Man of the match Gunaratne anchored the chase to perfection after Dickwella's departure, putting on an unbeaten 67-run partnership with Dilruwan Perera (29 not out).

Gunaratne, who played most of the Test as a batsman after injuring his hamstring in the first innings, tackled the Zimbabwe spinners with ease during his 151-ball stay.

Wicketkeeper-batsman Dickwella rode his luck to reach 81 before being caught behind off left-arm spinner Sean Williams while attemping an audacious reverse sweep.

Dickwella first survived a stumping chance from Sikandar Raza's off-spin on 37 and was then dropped by wicketkeeper Regis Chakabva on 63 to put the hosts on course for a win.

Dickwella's stumping reprieve cost the visitors dearly after it was referred to the third umpire, who ruled him not out despite replays showing his toe was on the crease – a case where the batsman can be given out.