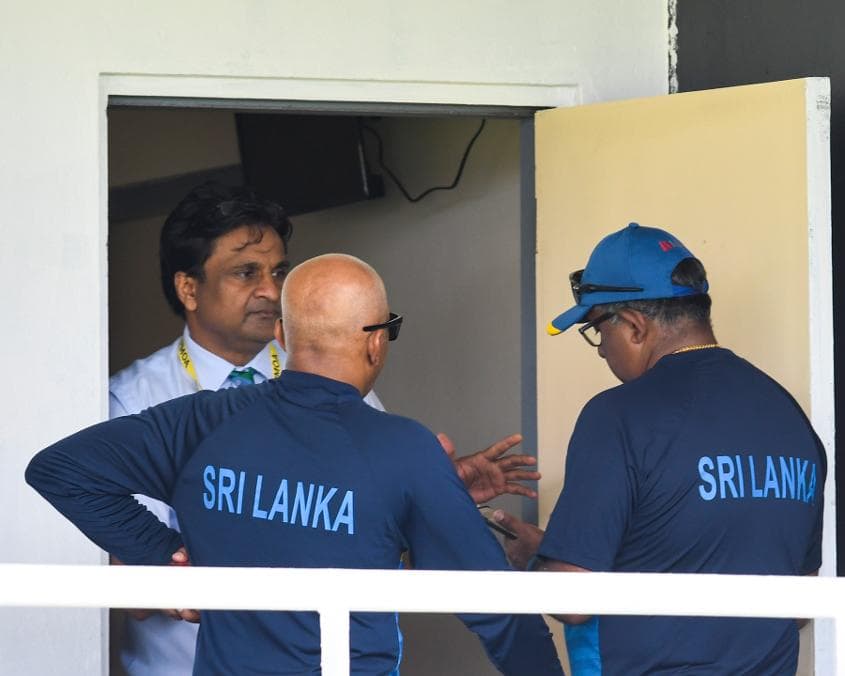 Sri Lanka captain Dinesh Chandimal has been suspended from his side's third and final Test against the Windies after he was found guilty of changing the condition of the ball during the second day's play of the second Test, which concluded at Gros Islet on Monday.

During a hearing held at the end of the St Lucia Test, in which video evidence was used in the presence of the Sri Lanka team management as well as the match officials, Chandimal admitted putting something in his mouth but wasn't able to recall what it was.

Javagal Srinath of the Emirates Elite Panel of ICC Match Referees, on Tuesday, after utilising the time available to him under the code to make his decision, handed Chandimal the maximum punishment available under the code, i.e. two suspension points and a fine of 100 per cent of his match fee.

As two suspension points equate to a ban from one Test or two ODIs or two T20Is, whatever comes first for the player, Chandimal will now miss the day/night Barbados Test, starting from Saturday, 23 June. Furthermore, and because two suspension points correspond to four demerit points, these have been added to Chandimal's disciplinary record.

Commenting on his decision, Mr Srinath said: "After reviewing the footage of the incident, it is clear that Dinesh applied an artificial substance to the ball, namely saliva containing the residue of something he had in his mouth, an action which is prohibited under the ICC Code of Conduct.

"The footage shows that upon receiving the ball, Dinesh took something from his pocket and put it into his mouth. After sucking or chewing whatever he put in his mouth for a few seconds, Dinesh then proceeded to spit on his finger and polish the ball with his saliva which would have contained the residue of the artificial substance that he had in his mouth, on two separate occasions."

"During the hearing, Dinesh admitted to putting something in his mouth but couldn't remember what it was, which I found unconvincing as a defence and the fact remains it was an artificial substance.

"In the pre-series briefing held on the back of the ICC Cricket Committee recommendations, both the sides were explicitly told that the match officials would be extra vigilant towards all aspects of fair play, including changing the condition of the ball and as such it is disappointing that this has happened."

ICC Chief Executive David Richardson backed the Playing Control Team, when he said: "The ICC fully supports the match officials in their decision and will continue to do so in any other such instances.

"The strong message from last month's ICC Cricket Committee was that there needs to be stiffer sanctions for offences such as changing the condition of the ball and, as such, we will be recommending to the ICC Board at next month's annual conference in Dublin to upgrade this to a Level Three offence."

On Sunday, Chandimal had pleaded not guilty after on-field umpires Aleem Dar and Ian Gould, and third umpire Richard Kettleborough, all from the Emirates Elite Panel of ICC Umpires, had charged him for changing the condition of the ball in breach of clause 41.3 of the ICC Standard Test Match, ODI and T20I Playing Conditions after play on Saturday.

The umpires had laid the charge after television footage from the final session's play on Friday, which had been made available before the start of play on Saturday, appeared to show the Sri Lanka captain taking something out from his left pocket and putting it in his mouth, before applying the residue of the artificial substance to the ball which they viewed as an attempt to change its condition.

Sri Lanka captain, coach and manager charged for conduct contrary to the spirit of the game


The three have been charged for their involvement in the Sri Lanka cricket team's refusal to take to the field in St Lucia in the second Test against Windies.

ICC Chief Executive David Richardson on Tuesday charged Sri Lanka captain Dinesh Chandimal, coach Chandika Hathurusinghe and manager Asanka Gurusinha with a breach of Article 2.3.1, a Level 3 offence, which relates to "conduct that is contrary to the spirit of the game".

The three have been charged for their involvement in the Sri Lanka cricket team's refusal to take to the field in St Lucia at the start of Saturday's play, which caused a two-hour delay in the start of play. This action is alleged to amount to a serious breach of the Laws of Cricket and to be contrary to the spirit of the game.

If any of the three plead not guilty, then the ICC, as per Article 5.2 of the ICC Code of Conduct, will appoint a Judicial Commissioner from its Code of Conduct Commission to determine the matter.

All Level 3 breaches carry an imposition of between four and eight suspension points.