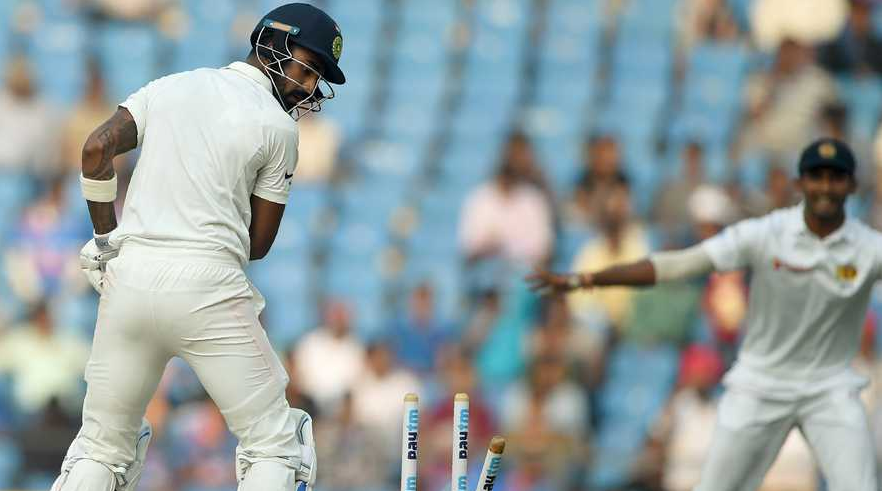 India lost a wicket early in their reply to Sri Lanka's below-par 205. © AFP

Sri Lanka were left "disappointed" their coach admitted after being bowled out on a green Nagpur pitch for a lowly 205 by India on the first day of the second Test thanks largely to the efforts of Ravichandra Ashwin and Ishant Sharma.

The hosts however had already lost the wicket of Lokesh Rahul (7), bowled by Lahiru Gamage off an inside-edge attempting a loose shot, to find themselves at 11/1 and trailing by 194 runs at stumps.

"It was a disappointing day for us," conceded Sri Lanka's coach Nic Pothas. "No demons on that wicket, we didn't bat as well as we should have done."

Sri Lanka's batsmen failed to give their side an advantage after captain Dinesh Chandimal won the toss and elected to bat, with Indian spinners Ashwin (4-67) and Ravindra Jadeja (3-56), as well as pacer Sharma (3-73), all among the wickets on what appeared to be a seamer-friendly surface.

The final session saw the visitors losing six wickets after being 151/4 at the tea break.

Skipper Chandimal (57) reached his half-century off 94 balls and was the highest scorer for his side, while Dimuth Karunaratne (51) also played a valuable hand against the new ball but both failed to convert and go onto bigger scores.

Murali Vijay (2) and Cheteshwar Pujara (2) were at the crease for India at the close of play.