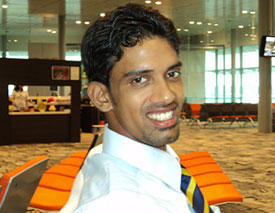 August 4, 2011 (Island Cricket): England Lions lead Sri Lanka A by 92 runs heading into the final day, and finished day three on 182-3 after bowling out Sri Lanka A for 389 in the four-day match played in Scarborough.

Rain delayed the start of play by 45 minutes this morning, and showers continued to sweep over the Scarborough ground throughout the day.

Earlier, Sri Lankan batsmen added 60 runs to their overnight score before Stuart Meaker took the two remaining wickets, both caught behind, to dismiss the tourists for 389, giving them a first innings lead of 90. The Surrey paceman finished with figures of 3-37.

Joe Root and Alex Hales started well for the Lions with a partnership of 98 before Hales edged a delivery from Sachithra Senanayake to first slip for 42.

With Ravi Bopara arriving at the crease, Root soon moved to 50 from 95 deliveries. After another brief stoppage for rain, Bopara became the second batsman to be caught at slip off Senanayake, having raced to 25 from 21 deliveries.

Root followed soon after, picking out mid-on off Sachithra Serasinghe to fall for 66.

Play continued beyond 7pm with captain James Taylor and Craig Kieswetter sharing 39 to guide the Lions to 182-3 at the close. Taylor remains unbeaten on 15 and Kieswetter on 24.

"I’m pleased with the way I played today, overall I think its been a good day for us," Root said at the end of the day’s play.

"I was disappointed with how I got out but we need to come back tomorrow and play confidently from the start and with our bowling attack we’re still looking to get a result."

Sachithra SenanayakeSri Lanka A in England 2011