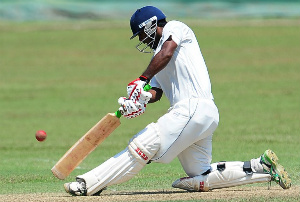 Sri Lanka A captain Dimuth Karunaratne led from the front to give his side an impressive start in the opening day of the second four-day unofficial Test match against South Africa A at Sahara Stadium Kingsmead on Friday.

Karunaratne 82 off 148 balls (6x4s – 1x6s) and Sachithra Serasinghe, who made a 88-ball half century (4x4s) batting at number seven, were the top scorers for Sri Lanka A.

South Africa A skipper Faf du Plessis won the toss for the second match in a row. But unlike the first match of the series, in which the home side bowled their visitors out inside of 45 overs, this time Sri Lanka batted through to the close of day one reaching 290/8 in 87.2 overs.

For the second innings in a row, Ryan McLaren (3/32 in 20 overs) was the most successful bowler for South Africa A while Pumelela Matshikwe and Simon Harmer took two wickets each.

South Africa A wicket-keeper Thami Tsolekile took six catches to take his total for the series to 13.

The hosts made several changes and allowed off spinner Harmer and batsman Temba Bavuma a chance to make their first appearances at South Africa A level.