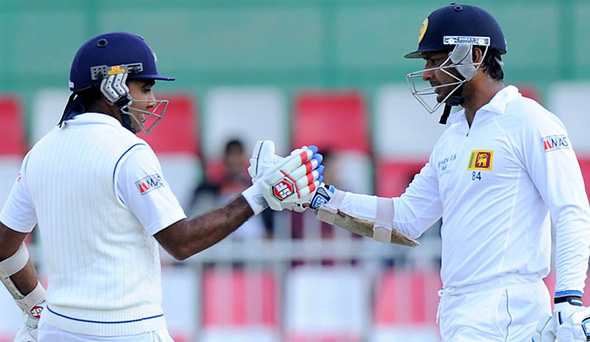 Sri Lanka ended the opening day on 220/5 after winning the toss and batting first against Pakistan in the third and final Test in Sharjah.

Kumar Sangakkara top-scored for Sri Lanka with 52 runs, while Mahela Jayawardena made 47. The pair added 60 runs for the third wicket.

Sri Lanka skipper Angelo Mathews (24) and Prasanna Jayawardene (28) combined to remain unbeaten at the crease at the end of the day’s play with a partnership of 54 for the sixth wicket.

Jayawardene reached 2000 Test runs during his innings becoming only the second wicket-keeper from Sri Lanka to reach the landmark.

Pakistan off spinner Saeed Ajmal (2-62) was back in the wickets after having a poor series, and ended the day as Pakistan’s most successful bowler. Junaid Khan and Abdur Rehman contributed with a wicket apiece.