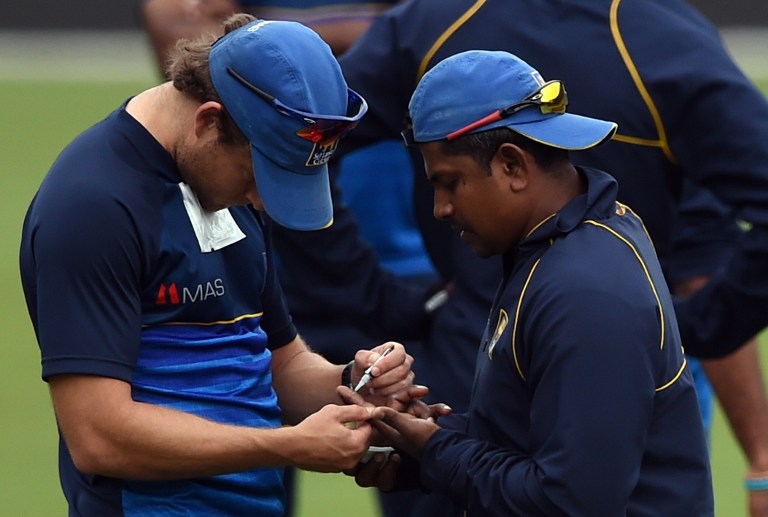 Rangana Herath's injury is still a cause of concern for the Sri Lankan camp. © AFP PHOTO

South Africa have a chance to finally shed their reputation as one of the most mentally fragile teams in international sport when they take on Sri Lanka in what should be a tight World Cup quarter-final on Wednesday.

Neither side has had the bowling performances they had hoped for so far but both are expecting key interventions from their top pacemen in the knockout stages, Dale Steyn for South Africa and Lasith Malinga for Sri Lanka.

Both showed good form in the pool stage but lost two of their six games, while their record against each other in one-day internationals is well balanced with Sri Lanka just ahead on 29 wins to 28 for South Africa.

Where Sri Lanka have a clear edge, however, is in the World Cup record books.

Champions in 1996 and finalists in the 2007 and 2011 tournaments, the islanders have shown the ability to hit form at the right time and flourish in the pressure of the knockout stage.

South Africa, by contrast, have lived with the chokers tag for many years now and defeat at the Sydney Cricket Ground on Wednesday will trigger another bout of soul-searching back home.

It was at the SCG that the South Africans bowed out of their first World Cup in 1992 after the victory target revision in the wake of rain disruption condemned them to defeat against England.

Their exits since have been a mixture of mistakes — Herschelle Gibbs "dropping the World Cup" in 1999 — high farce — Shaun Pollock miscalculating the victory target in 2003 — and simply being outplayed — against Australia in 2007.

On paper, the 2015 side is the equal of any of their predecessors and, it appears, the biggest threat to them winning a first knockout match at a World Cup is themselves.

Sri Lanka know that and will take any opportunity they have to ramp up the pressure, especially if skipper Angelo Mathews wins the toss.

Muttiah Muralitharan's simple advice to his compatriots was "win the toss and do not get too hung up thinking about AB de Villiers".

Unless there is cloud cover over the SCG, and the weather forecast indicates there will not be, both sides are likely to follow the spin-bowling great's advice and bat first.

South Africa lost to both India and Pakistan in the pool stage batting second, as did Sri Lanka against New Zealand and Australia, and they have concerns over the form of opener Quinton de Kock.

With Hashim Amla at the top of the order and Faf du Plessis fit again after a back problem, though, South Africa have enough batting to carry one out-of-form player even before you consider the carnage de Villiers can wreak on his day.

Sri Lanka's top order, which also features Mahela Jayawardene and Tillakaratne Dilshan, have carried them through to the last eight and they have managed well enough without frontline spinner Rangana Herath, who remains an injury doubt, for their last two matches.