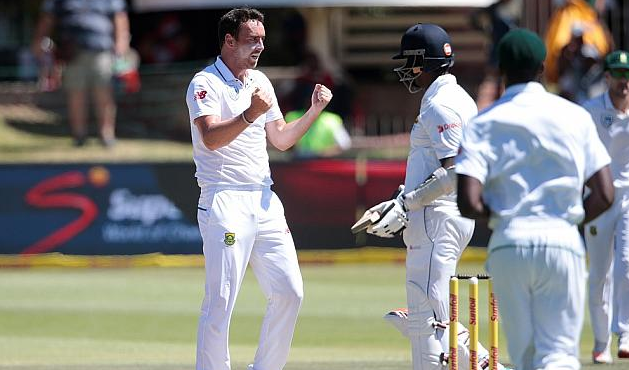 Sri Lankan hopes for an unlikely victory rested largely on the shoulders of Dhananjaya de Silva and his captain Angelo Mathews, but with the pair both sent back to the pavilion early in the day, a collapse from the lower order duly followed.

Kyle Abbott claimed both of the key men, as he finished with 2-38. Kagiso Rabada was also impressive after a poor first innings display taking 3-77.

Mathews (59) was the first to go, falling across middle stump to an LBW shout from Abbott and giving the umpire an easy decision. Having added only one to his overnight score and knowing he was crucial to Sri Lanka's cause, he reviewed in vain and was on his way when the ball tracking technology showed the ball was crashing into leg stump.

Rangana Herath would have left Sri Lankan fans with their hearts in their mouths, as he was given a nasty bouncer from Abbott first ball that cannoned flush into his bowling hand. Sri Lanka's premier spinner was in some serious pain, shaking his fingers in agony before the 'magic spray' was finally brought out.

While Herath rode out another barrage of bouncers, de Silva followed Mathews to the pavilion, LBW again to Abbott. The 25-year-old de Silva had impressed the South African crowd with a few crisp shots, but had to depart for 22 as the score fell to 258/7. Herath was then caught and bowled by a brilliant catch from Vernon Philander, who dived low to his right to remove a still-sore Herath.

Dushmantha Chameera added a couple of entertaining runs with fellow paceman Suranga Lakmal (19 not out) but the end was nigh. Chameera was removed for a duck by a superb Rabada delivery that snuck onto the glove and into the waiting hands of Quinton de Kock.

Maharaj then finished things off for South Africa with a terrific delivery that cleaned up the stumps of Nuwan Pradeep.

Mathews said the Sri Lankan first innings was where things fell apart for his team. "If we can bat well from the beginning, we don't have to fight back," Mathews remarked.

Mathews also blamed "terrible shots" for Sri Lanka's poor batting across both innings, as they had fallen for just 205 in the first innings, even before the collapse on the final day.

There is a quick turnaround between the first and second Tests, with the next match in Cape Town beginning on January 2. But, in the meantime, Sri Lanka will be sweating on the match fitness of Herath, who is the leader of their attack even in foreign conditions that are far from spin-friendly.