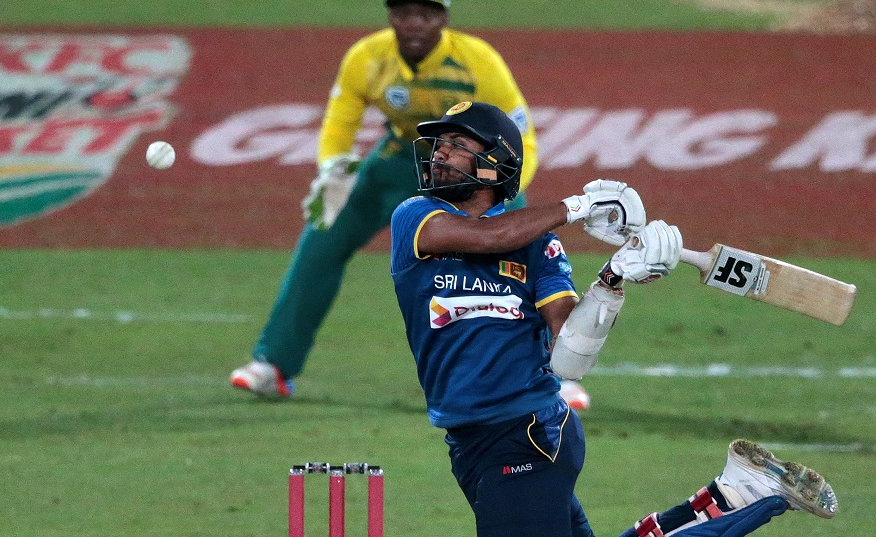 Sri Lanka were hoping for a better showing after being whitewashed in the three-match Test series. © AFP

Despite a mature 43 from Niroshan Dickwella, a match winning knock of 40 by David 'Killer' Miller was followed by 2-12 on debut by Lungi Ngidi, as South Africa defeated Sri Lanka by 19 runs in a rain-affected Twenty20 at Centurion's SuperSport Park.

The first of three matches in the series was cut down to 10 overs due to rain. When the rain finally relented, Sri Lanka chose to field, banking on a chase under lights. They began well with the ball, removing both openers by the time score reached 30.

Nuwan Kulasekara then trapped Heino Kuhn LBW for 10 and a flurry of boundaries was followed by the wicket of Jon-Jon Smuts, who was caught by Asela Gunaratne off Suranga Lakmal.

At 30/2, Theunis de Bruyn came in and smashed a 10-ball cameo of 19 runs before granting Gunaratne his second catch, this time off spinner Seekkuge Prasanna.

The 24-run stand had stabilised South Africa, and as Proteas captain Farhaan Berhardien came out to join Miller, both sides were well aware that this was a crucial partnership. With so little time in the game and nearly five overs already gone in the innings, Miller and Berhardien could ill afford to waste time at the crease.

The pair added a match-winning 51 for the fourth wicket, with Miller striking 40 from just 18 balls, containing three fours and three sixes. He eventually fell to Kulasekara, who was one of Sri Lanka's best bowlers, claiming 2-27.

Berhardien also faced 18 balls for his unbeaten 31, smashing three fours and a six. Their crucial stand ensured South Africa finished on a challenging 126/5 from their 10 overs, leaving Sri Lanka with a scoring rate of more than 12.50 an over to win.

Despite the daunting nature of the chase, Sri Lanka began strongly, scoring 50 for their opening wicket.

The charge was led by a stellar knock of 43 from 19 balls by Dickwella, who struck six fours and two sixes. But he was also the first to depart, caught by de Bruyn off Imran Tahir.

Dhananjaya de Silva continued to prove his versatility, scoring 27 from 16 balls to keep Sri Lanka alive. But when Thikshila de Silva fell for a first ball duck to leave the score on 73/3, Sri Lanka were in trouble and never recovered.

All three wickets had fallen to spinners, but the introduction of paceman Lungi Ngidi didn't help the tourists' cause. He removed Prasanna and Kusal Mendis and conceded just six an over, stifling Sri Lanka's faltering chase at a crucial time and reducing them to 90/5 at the end of the eighth over.

Ngidi's efforts earned him the Man of the Match award, with Sri Lanka falling 19 runs short of their target.

Following Sri Lanka's loss in Centurion, the next match will be played in Johannesburg on January 22 at the famed Wanderers Stadium.