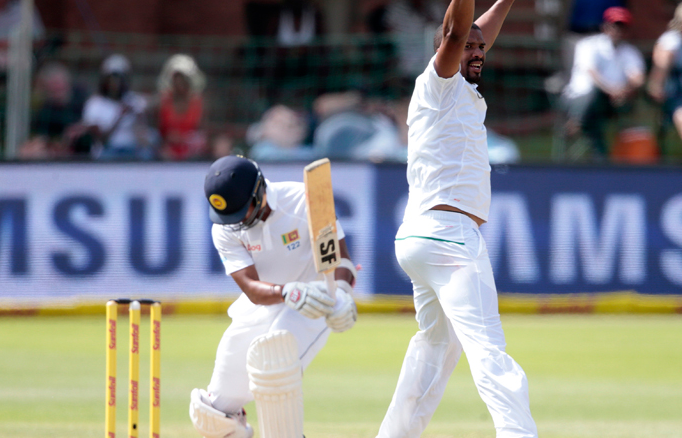 Sri Lanka's batsmen failed to make use of the advantage their bowlers had given them. © AFP

After being dismissed cheaply on the second morning in Cape Town, South Africa's bowlers came storming back into the match, engineering a Sri Lankan top order collapse that the visitors were unable to recover from. Sri Lanka ended the second day after poor light stopped play at 181/7, still 105 runs short of South Africa's first innings total of 286.

The pick of the South African pacemen was unsurprisingly Vernon Philander, whose control and movement off the seam are perfectly suited to this green Cape Town deck. South Africa's most consistent seamer claimed 3-35 from his 16 overs, including the key scalp of Dinesh Chandimal. He was well supported by Kyle Abbott who snared 2-49 and Keshav Maharaj, who bowled 10 overs for 30. After an excellent tour of Australia, Kagiso Rabada struggled, with an expensive 1-63 from 13 overs.

For Sri Lanka, only skipper Angelo Mathews (39) and Dinesh Chandimal (28) were able to offer significant top order resistance. Going into day three, the visiting island nation's hopes will now rest on the shoulders of Test rookie Dhananjaya de Silva, who remains unbeaten on 43.

Earlier in the day, Suranga Lakmal completed a long-awaited maiden five-wicket haul, taking 5-63 as the Proteas fell to 286 all out after being 267/6 overnight. The morning session began largely without alarm for the South African batsmen, as Quinton de Kock (37) and Philander (13) added 10 without loss before Philander top-edged a pull shot to Dushmantha Chameera, who claimed an excellent catch off the bowling of fellow paceman Nuwan Pradeep.

In the next over, Lakmal claimed spinner Keshav Maharaj for a duck on his third ball. Chandimal continued his good run with the gloves with another superb take, and it was suddenly eight down for 276. Lakmal was warmly congratulated by his teammates, but as Sri Lanka's toughest workhorse, he was typically subdued in his own celebration.

de Kock attempted to shield the tail, but in doing so brought on an embarrassing run out for Kyle Abbott. He struck another typically brutal boundary down the ground, but was undone by a terrific inswinging Yorker from Pradeep to end the innings.

Sri Lanka's openers were edgy in response, and it only took three overs and 10 runs for Abbott to make the opening breakthrough, with Dimuth Karunaratne bowled for five.

Kusal Perera tried to play a slashing cut off Philander three overs later but only succeeded in feathering an edge through to de Kock. South Africa's keeper then took another fantastic take from the edge of Kusal Mendis's bat to dismiss him for a duck and grant Abbott his second wicket.

At 22/3, it was looking like another overseas Sri Lankan collapse. Mathews and Kaushal Silva steadied the ship until the lunch break, with the score at 37/3, but there would be further trouble to come.

Philander wrapped Silva on the pads shortly after lunch and was so confident in his appeal that he ran down the wicket with not so much as a second glance at umpire Bruce Oxenford's finger. The crucial 39-run stand was broken and Sri Lanka were in tatters again at 61/4.

Despite a largely poor day for Rabada, he did claim perhaps the most important wicket, snaffling the edge of Sri Lankan captain Mathews, with Dean Elgar taking a good low catch to his right. At 94/5, and Sri Lanka's two last established batsmen at the crease, it was not looking good for the tourists.

But Sri Lanka's vice captain Chandimal hung in before eventually falling leg-before to Philander. Chandimal reviewed the decision, but even to the naked eye, the ball seemed to be cannoning into middle stump and the replay certainly proved so.

Veteran spinner Rangana Herath was typically entertaining before he was undone LBW by Maharaj for 24. It was an interesting battle, as Herath had praised Maharaj's skill at the start of the series, saying, "He's got all the essentials — with his accuracy, his line and his lengths. If he improves his variations he'll go far." Maharaj himself had remarked earlier that he has "always looked up" to Sri Lanka's premier spinner.

de Silva struck a few crisp boundaries before early stumps was called, and he was his usual convincing self against the spin of Maharaj, coming down the wicket to strike him over deep mid-wicket for four. He ended the day unbeaten on 43, with fast bowler Dushmantha Chameera at the other end on 7.