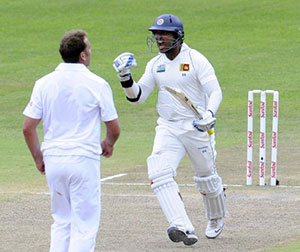 Cricket South Africa (CSA) announced on Wednesday that it had accepted a request from Sri Lanka Cricket (SLC) to postpone the Test series, which was to be played during South Africa’s tour to the island next year.

The Test series will now take place in June/July, 2015. South Africa will still fulfil their obligation to play five ODIs and three T20 International matches in 2013.

“We have acceded to the request for two reasons,” CSA’s acting CEO Jacques Faul said in a statement today.

“In the first place, we have a very good relationship with Sri Lanka Cricket and we have done our best to assist them. In the second place, it actually works out quite well for the Proteas in handling their workload effectively.

“Had we proceeded with the Test series in Sri Lanka next year, it would have meant that the Proteas would have played 11 Test matches between July, 2013, and March, 2014.

“The matter has been discussed with the Proteas team management as well, and it has been agreed that this is the best way forward both for CSA and Sri Lanka Cricket. The Proteas will now undertake their Test tour of Sri Lanka in June, 2015, before they move on to Bangladesh in July as part of the ICC Future Tours Programme (FTP).

“I would like to stress that there was never ever any question of the Test series against Sri Lanka not happening. The status of Test cricket is paramount as far as we are concerned. We retain the same number of Tests as far as the (FTP) is concerned until 2019/2020.”

The Sri Lankan cricket board had requested the postponement of the Test series inorder to accomodate the Sri Lanka Premier League T20 tournament.