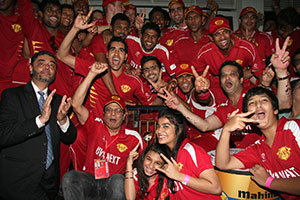 Several overseas players are still awaiting payment for their participation in the recently concluded Sri Lanka Premier League (SLPL) despite the organisers of the tournament claiming otherwise.

Tim May, chief executive of the Federation of International Cricketers’ Associations (FICA), said that the Singapore-based Somerset Entertainment Ventures (SEV), the event management company responsible for the SLPL, has yet been unable to secure payment from a SLPL franchise who still owe as much as 50-percent to players more than a week after the completion of the tournament.

All payments, as stipulated in player contracts, were required to have been completed at the conclusion of each team’s final match of the tournament.

"There are still a number of foreign players that are awaiting payments, 50-percent of their total salary, from one franchise," May told Island Cricket today.

"This matter was raised recently by FICA with the organisers who are chasing the payment from the franchise. We are hopeful that it will be paid next week."

In addition, May said that FICA would advocate a boycott of next year’s SLPL if the Sri Lankan cricket board and SEV are unable to present FICA with proof that guarantees from a lending institution have been obtained to settle players’ payments if the franchisees fail to do so.

FICA was not provided with proof of a bank guarantee during this year’s tournament which, according to May, is a breach of contract.

"Despite several and consistent requests… SLC, SEV simply did not produce one guarantee," May said.

Earlier this week, SEV chairman Sandeep Bhammer told Sri Lanka’s Daily Mirror newspaper that his company had "delivered a bona fide tournament" and "all players have been paid."

Later, when informed of FICA’s dissatisfaction over the non-presentation of bank guarantees, Bhammer told ESPNCricinfo that a "pay order" had been provided to FICA instead of a guarantee.

"This is a complete fabrication. At no stage has any pay order [been] shown to FICA," May said, denying Bhammer’s claims.

"Despite many requests, neither a bank guarantee nor pay order was ever produced. [Bhammer’s] assertion that it was shown to FICA is an outright and complete lie."

May also refuted Bhammer’s claim that FICA had forced tournament winners Uva to pay their players in full midway through the tournament, contrary to the requirements of the contract, when the franchise failed to honour its payment agreement. Faced with the threat of a pullout by players during the tournament, the Uva franchise eventually paid part of its dues.

For future editions of the SLPL, proof that bank guarantees have been obtained from institutions approved by FICA must be presented six months prior to the start of the tournament, as outlined in player contracts.