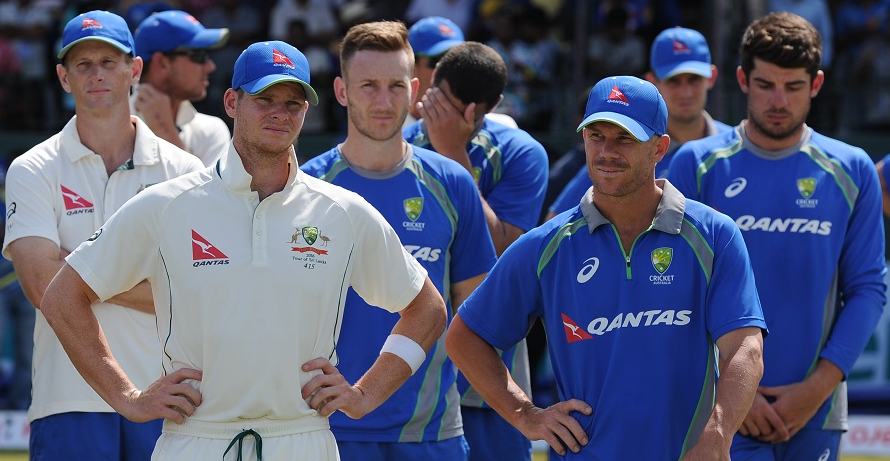 Steve Smith had not lost a Test match as captain prior to this series. © AFP

117 all out in Pallekele — "This will be another easy series win for Australia," say the naysayers.

121/6 in Galle — "Sri Lanka have thrown away another winning position," they claim.

26/5 in Colombo — "They've done all the hard work only to toss aside the dead rubber as usual," howl the detractors again.

Time and again, Sri Lanka found a way to win from each of those insurmountable situations, and in doing so, they silenced their detractors with a three-nil whitewash against Australia. The result was so unbelievable, it makes Leicester's 5000/1 Premier League triumph seem like a walk in the park.

Rather than finding a way to win, somehow Sri Lanka had found a way to lose in their previous series against England. They showed moments of promise and glimpses of talent, including with Kusal Mendis, a major hero in the the Australian series.

But any moments of glory in England proved to be a flash in the pan, as Sri Lanka collapsed spectacularly with the bat in the first Test, losing by an innings and 88 runs. This came after Sri Lanka had reduced England to 233/8 in the first innings, before conceding nearly 300 and then falling for just 91 and 119.

In the second Test at Chester-le-Street, they managed to score 475, with Chandimal getting 126, but it was only after being bowled out for 101, thus being consigned to a nine-wicket loss. Mendis top scored with 35 in that paltry total of 101, but nothing could hide Sri Lanka's utter failure, with Angelo Mathew's poor captaincy being singled out in particular.

Going into the Australian series, Sri Lanka had won only four out of their last 14 Tests, one of those victories being an embarrassing game, where Rangana Herath had come to the rescue against West Indies.

A two-nil series win against the Windies was flattering to deceive, and the other two wins both came in the opening Test of the series against India and Pakistan, with Sri Lanka still struggling and falling to massive losses to lose both series two-one.

Australia came into the series as the number-one ranked team in the world. Recent series losses in the region perhaps indicated that they had some issues winning in Asia, but they had taken steps to address the issue, with several of the squad arriving in Colombo early to adjust to local weather. They had also sent the Australian A team to India to improve their record against spin, and played practice matches before the tour.

The Aussies ought to have been thrilled with the way the practice match went. They coasted to a total of 474. Steve Smith scored 57 and appeared to have inherited his predecessor Michael Clarke's reputation as an excellent player of spin, while off-spinner Steve O'Keefe was indestructible, top-scoring with 78 not out and taking a match haul of 10-64 as the tourists won by an innings and 162 runs.

Australia eased their way into the series, bowling Sri Lanka out for a mere 117 on just the opening day of the tour. Dhananjaya de Silva gave the Pallekele crowd something to smile about, getting off the mark with a six in Test cricket, but other than that, it looked bleak as usual.

Rangana Herath tried manfully to get Sri Lanka back into the contest, and he was ably supported by Lakshan Sandakan, with the pair taking four wickets each as Australia fell for 203. The Aussies took a sizeable first innings lead, and it was not until Mendis walked to the crease, with Sri Lanka in trouble at 6/2, that the series changed irreversibly.

Much has been made of Australia's struggles against spin in the post-series analysis, but to chalk the Sri Lankans series win down to that alone is to seriously downplay the value of Sri Lanka's many great innings, in particular Mendis spectacular 176.

With the occasional piece of luck, Mendis mixed attack and defence impeccably in Pallekele to hand a big fourth innings target for Australia. He struck 21 fours and one huge six, which brought up his century, and had the Australians at a loss for what to do. Only Steve Smith, with 55 in Australia's response of 161, was able to score fifty. As miraculous as it seemed after the first day, Sri Lanka had indeed won by 106 runs.

And unlike the previous series against India and Pakistan, the momentum did not stop there. Honours were evenly shared after day-one of the second Test in Galle, with Australia dismissing Sri Lanka for a decent 281, but the Sri Lankans took command the following day, bowling Australia out for 106.

But, in the middle session, they collapsed to 121/6 in reply and again handed the touring party a chance.

Dilruwan Perera was this time the man. He ensured Sri Lanka hung in by scoring 64 to set Australia a target of 413, which looked all but unattainable after they fell to 25/3 by stumps. Sri Lanka wrapped it up by the third day, dismissing Australia for 183 and sending the country into raptures with their 229-run win.

A whitewash of historic proportions

But the naysayers were groaning louder than ever in the third Test at the SCC, when Sri Lanka crumbled unbelievably to 26/5, facing by far the toughest situation in the series.

Yet, once again, this youthful team, minus the talents of retired stars Kumar Sangakkara, Mahela Jayawadene and Tillakaratne Dilshan, stunned all and sundry with a never-say-die attitude. Dinesh Chandimal (132) and Dhanajaya De Silva (129) put on 211 for the sixth wicket and took Sri Lanka to 355 — their highest score of the series.

It was hard going for the hosts on the field in Colombo, with Australia reaching a cruisy 267/1 in their first innings reply before Herath's intervention.

Despite a 79-run lead to Australia, de Silva shored Sri Lanka up again with 64 not out in a total of 347. The unlikely star in their second innings though was Kaushal Silva, who had struggled all series and was batting with six stitches to his injured hand. Silva came through for his team with a scrappy, tough innings of 115 to help set Australia yet another stiff target.

David Warner's aggression was insufficient in the run-chase to take Australia to their target of 324, as they lost their last eight wickets for 60 runs and the Sri Lankans ran out 163-run winners against all odds.

An under fire captain leading a side ranked as low as seventh, and in the midst of one of their worst form slumps, could not in his wildest dreams have imagined he would beat Australia three-nil.

But, with a combination of mental fragility against the spinning ball from the tourists, the outstanding skills of the home team's spinners, and level-headed batting in times of crisis; Mathews and his team have managed to do what no other talent-laden Sri Lankan team has before.

That it was against a rival to whom Sri Lankan players and fans have historically felt much animosity, will make it all the better.