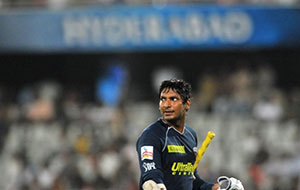 The team which Sri Lanka’s Kumar Sangakkara captained in the IPL last year, Deccan Chargers, have been thrown out of the tournament, India’s cricket board said on Saturday.

The team was booted out because the owners, Deccan Chronicle Holdings, were unable to provide the required $19 million guarantee money and due to several other violations of their agreement, including non-payment of wages to players.

The team’s owners can take the matter up in a higher court. But if they choose not to, the Indian board will likely call for tenders in a bid to form a new team.

A week ago, Sangakkara was hopeful that the team owners and the BCCI would come to a resolution, and said that the players had no issues with payments.

"Players have been paid and that’s great. The franchise has ensured that they’ve always kept their word to the players and honoured all the contracts they have signed," Sangakkara told Reuters.

Sangakkara was picked up by Deccan Chargers in 2011 for $700,000. He played for Kings XI Punjab in the three previous editions of the tournament, and captained the side from Punjab in one edition.