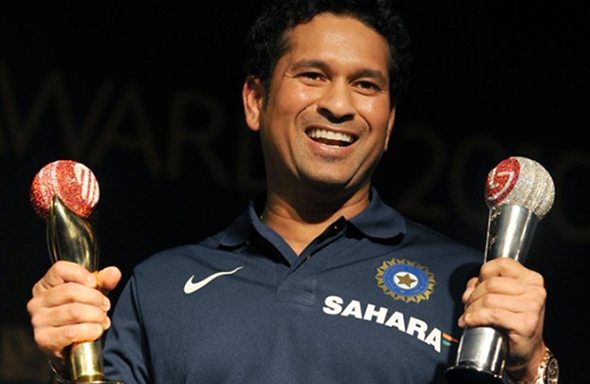 Sachin Tendulkar poses with his ICC Cricketer of the Year and Peoples Choice trophies during the International Cricket Council (ICC) award 2010, in Bangalore on October 6, 2010. AFP PHOTO/Dibyangshu SARKAR.

October 06, 2010 (Island Cricket): Sri Lankan skipper Kumar Sangakkara has been included in the ICC Test Team of the Year at the LG ICC Awards, held at a glittering ceremony today in Bengaluru, India.

Mahela Jayawardene who was nominated for the Twenty20 International Performance of the Year award and the LG People’s Choice Award missed out to Brendon McCullum and Sachin Tendulkar, respectively.

Angelo Mathews who was nominated for the Emerging Player of the Year award also missed out, with Steven Finn of England winning the title.

New Zealand have won this year’s Spirit of Cricket award which Sri Lanka have won twice in previous years.

Tendulkar, named as the first recipient of the inaugural LG People’s Choice Award, was also named in both the Test and ODI Teams of the Year.

Meanwhile, Australia’s Shelley Nitschke became the second Australian to win the Women’s Cricketer of the Year Award (former captain Karen Rolton took the prize in 2006) and Netherlands’ Ryan ten Doeschate was named the Associate and Affiliate Player of the Year gong, an award recognising the contribution of the teams below Full Member status are making in the world of cricket.

In total there were nine individual awards handed out, as well as the Spirit of Cricket Award and the two ICC Teams of the Year – for Tests and ODIs.

Aleem Dar of the Emirates Elite Panel of ICC Umpires won the Umpire of the Year Award for the second year in a row, while New Zealand took the Spirit of Cricket Award as it did in 2004 and in 2009.

The Twenty20 International Performance of the Year was won by New Zealand’s Brendon McCullum who became the third-ever recipient of the honour. McCullum took the trophy following his spectacular 116 not out off 56 balls against Australia in Christchurch in February of this year.

ICC President Sharad Pawar said: "This past year of cricket has been another exciting one for players and supporters around the world in a time that included the ICC Champions Trophy 2009, the Men’s and Women’s ICC World Twenty20 2010 and ICC World Cricket League Division 1 and plenty of competitive Test and ODI cricket.

"These players have contributed hugely to our enjoyment and this night is all about recognising that excellence and talent."

ICC Test Team of the Year is as follows (in batting order):

ICC ODI Team of the Year is as follows (in batting order):

With inputs from ICC media release.